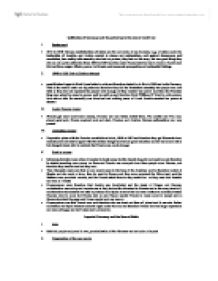 Unification of Germany and the period up to the second world war I. Background * 1815 to 1848 German confederation of states and the zollverein it was basically a gp of states under the leadership of Austria, and Austria wanted to stamp out nationalism, and against democracy and revolution, lose entity with assembly who had no powers, they had no fed army, but one good thing they did was set up the zollverein from 1832 to 1834 and this made Prussia take the lead in front of Austria and this had three major effects ; power to Prussia and economic prosperity and nationalist feelings II. 1848 to 1850 first unification attempts * great thinkers began to think it was better to unite and therefore started to do this in 1848 and unite Germany with all the rest to make one big state and therefore they did the Frankfurt assembly but people soon lost faith as they did not represent the people well enough all they wanted was power and then the Prussian king was asked to come to power and he said no and therefore Fred William IV tried to unite powers from above after the assembly was dissolved and nothing came of it and Austria asserted her power at olmutz III. Austro Prussian rivalry * Prussia got more and more money, Crimean war and Italian defeat there, Von moltke and Von roon played great part, Prussia explored coal and steel, Prussian and Austrian German nationalism was very present IV. Unification process * Preparation phase with the Prussian constitutional crisis, 1860 to 1862 and therefore they got Bismarck since assembly did not want to agree with the military budget and he had good education and he was conservative but changed ideals after he realized that Prussia was much stronger V. Road to success * Schleswig hollstein issue where H wanted to break away but the Danish king did not want too and therefore he started asserting more power on them and Prussia was ...read more.

in 1934 after the death of Von Hinderburg 2. he was appointed in the 30th Jan 1933 to a cabinet which only contained 2 other nazis and a majority of nationalists and Hitler immediately wanted to secure power for himself and the nazi party and an end to its dependence on other parties, Hitler precipitated the Reichstag elections and the election campaign was used to extend nazi power and influence by setting up of the SA and the SS 3. the Reichstag building was then burnt down and Hitler accused the communists, and therefore hindenburg allowed for a law which called for the suppression of many civil liberties and many communists were therefore arrested and purged and many knew it was had been Hitler who was responsible and just used it as an excuse to kill communists 4. nazi got larger percentage in voting now and the communist party was banned but the most vital bill was the enabling bill which gave Hitler full and total powers on the 23rd March 1933 and this would give him all power for a year where he could make laws without asking the Reichstag and could also make alliances with other treaties and go against the constitution, SA and SS put pressure on people and the bill was enacted and therefore Hitler turned on his enemies 5. catholic parties were declared illegal SPD was also dissolved some time after trade unions banned, nazis became the only legal party in 1933 and up to august 1934 this was considered period of co-ordination where nazis infiltrated everything 6. serious opposition was the SA and right wing nationalists since they had hoped to get power through Hitler which they did not, Hitler used right wing support to gain respectability here and abroad with also his concordat with the Vatican, and the Germany withdrawal from the LN which both won support of traditional Germans and opposers of weimar rep but support for Hitler was short-lived, and therefore a lot of them ...read more.

he then entered rhineland and this could have been stopped as he had an illusion of strength but in fact was not that strong at all he was anyway more ready for short war than long one but also he withdrew from the league of nations and the disarmament conference, and did non aggression pact with Poland in 1934 for ten years, then he went into France's security zone and then also had serious talks with Mussolini 3. conscription then naval treaty with Britain so she was calmed down, and France was pissed since England saying OK to going against treaty, he got back the SAAR as has been promised to him and so his unification had begun then also went into rhineland again which went against Versailles and locarno, then went to get alliances, got Rome Berlin axis and allowed to recognise Austrian independence as long as she was friendly to Germany to follow there was Austrian anchluss, he also recognised franco's regime, anti comintern pact with Japan 4. lord Halifax was sent to calm his down and French went to eastern Europe to try to strengthen alliances there 5. after 1937 Hitler achieved all three first aims anchluss with Austria and had gone all against Versailles treaty too, won Czech too after Munich conference, he then took back his agreements with Poland and UK saying it was trying to circle Germany, non aggression with Denmark Latvia and Estonia, and then strengthened alliance with Italy too and in 1939 non aggression pact with Russia too, even though totally against his thing against communism in the beg but that was OK since he needed it self interest was more important at this point, however he miscalculated with Poland since he thought they would let him have it there is debate whether all this was planned or not and seems to think that really he did not he was just great opportunist and he knew extra living space would be the hardest thing to do ...read more.