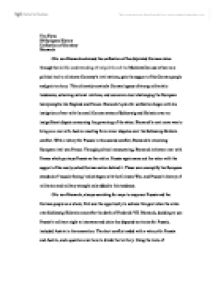 Tim Flynn IB European History Unification of Germany Bismarck Otto von Bismarck achieved the unification of the disjointed German states through the skillful understanding of realpolitik and the Machiavellian use of war as a political tool to eliminate Germany's rival nations, gain the support of the German people and gain territory. This ultimately created a German legacy of strong militaristic tendencies, scheming national relations, and economic clout challenging the European heavyweights like England and France. Bismarck's plan for unification began with his instigation of war with the small German states of Schleswig and Holstein over an insignificant dispute concerning the governing of the states. Bismarck's next move was to bring on a war with Austria resulting from minor disputes over the Schleswig-Holstein conflict. With a victory for Prussia in this second conflict, Bismarck's remaining European rival was France. Through political maneuvering, Bismarck initiates a war with France which portrays Prussia as the victim. Prussia again came out the victor with the support of the newly united German nation behind it. ...read more.

The final arrangement was as abrasive as possible, and the Seven Weeks War, between Prussia and Austria soon followed because of this outcome. Bismarck entered this war with a unique goal for its conclusion as his main goal was not to instigate a conflict to defeat an enemy, but to merely assert the sovereignty of the German states. He kept this goal in mind when conducting the war, and he avoided creating a humiliating defeat for Austria as Bismarck intended to keep Austria as strong ally for Germany not a bitter foe. This war would give Prussia yet another chance to prove her military clout, defeating one of the most notorious European powers in the east. Prussia was aided by Italy, which was also attempting unification despite Austria's attempts to prevent it. Ultimately, Prussia would be victorious in war, surprising most of Europe, and identifying itself as a new power to be feared in Europe. ...read more.

Otto von Bismarck's legacy as the prime minister of Prussia would lead Germany from its beginnings as a group of disjointed states to a unified and galvanized nation. Like Italy, Germany had quite a few serious issues to resolve once unification took place. Regional differences, developing since the first settlement of the Germanic tribes during the Roman Empire, were distinct, and local princes refused to give up substantial power to the central government. The Berlin assembly, therefore, was kept weak. Germany, like the United States under the Articles of the Confederation, seemed merely a loose of confederation of autonomous states. In Germany's case, one state, Prussia, was absolutely dominant due to its size, power, and military strength. This, combined with Bismarck's skillful conduct in international and national affairs as chancellor, kept the empire together until 1914. He achieved this drastic change by instigating three successful wars which advanced the German cause and asserted its independence. This ultimately led to bitterness among many Europeans towards Germany for her reputation, as well a great industrial and economic success. ...read more.