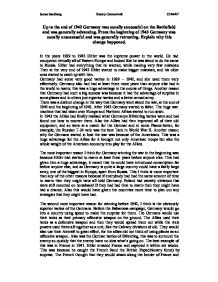 Up to the end of 1942 Germany was usually successful on the Battlefield and was generally advancing. From the beginning of 1943 Germany was usually unsuccessful and was generally retreating. Explain why this change happened. In the years 1939 to 1942 Hitler was the supreme power in the world. He had conquered virtually all of Eastern Europe and looked like he was about to do the same to Russia. Hitler had everything that he wanted, while making very few mistakes. Then at the very end of 1942 Hitler started to make bigger mistakes, and his older ones started to catch up with him. Germany had some very good tactics in 1939 - 1942, and she used them very effectively. Germany also had had at least three more years than anyone else had in the world to rearm; this was a huge advantage in the course of things. Another reason that Germany had such a big success was because it had the advantage of surprise in some places and in others just superior tactics and a better-armed army. There was a distinct change in the way that Germany went about the war, at the end of 1942 and the beginning of 1943. After 1942 Germany started to falter. ...read more.

Both of these reasons are good ones and worked up to the end of 1942, but after that the War began to change. It became more of a fair fight, as the Allies armies' began to catch up in size with their Axis counterparts. Also the Allies began to realize what the German tactics were, and they found ways to counter the effectiveness of these tactics. Hitler also made some stupid mistakes before 1943 that did not help him win the War. The Axis' first major mistake was to have a war on more than one front. The whole idea of blitzkrieg was so that he would not have to have a war on more than one front. This is what he accused the Kaiser of doing in the First World War, and this is what he thought lost World War I for them. In August 1939 Ribbentrop (German Foreign Secretary) and Molotov (Russian Foreign Secretary) signed the Russian-Soviet non-aggression pact, with the secret protocol ensured a forth partition of Poland. This was to ensure that Hitler would not have to worry about Russia for a while, so that he could concentrate on other things. But on the 25th August 1939 the British and Polish Governments signed the Anglo-Polish treaty. ...read more.

Also because Blitzkrieg relied on being so fast that your enemies are taken by surprise, it would need good roads and communications systems to work. In Russia they just did not have these things. This meant that the speed of the German army was cut down by nearly half, and so the Russians knew that they were coming and therefore could plan ahead to keep the Germans back. By 1943, the Allies had had a chance to catch up with German War Production. This meant that they now had better weapons and tactics than they did in 1939. They now knew what the Germans were capable of and so could now plan against it. This meant that when America joined the War the Allies had a huge advantage. The most powerful country in the world had just joined the allies' side, bringing almost an unlimited supply of men arms and technology. They also brought with them a huge moral boast, for the Allies had been thinking that the War might have been all over for them, but when the Americans came with their men and weapons the Allies suddenly thought that they had a clear shot at victory. This is why the allies started to win the war after 1943, and also because the Germans were bled on the battle fields in Russia. James Sandberg History Coursework 25/04/07 ...read more.