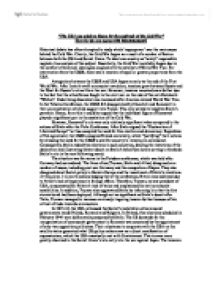 USA to blame for Cold War?

"The USA was solely to blame for the outbreak of the Cold War" How far do you agree with this statement? Historical debate has often attempted to study which 'superpower' was the main cause behind the Cold War. Clearly, the Cold War began as a result of a number of factors between both the USA and Soviet Union. To label one country as "solely" responsible neglects true analysis of the subject. Essentially, the Cold War inevitably began due to the conflict of historical ideologies coupled with the catalyst of World War Two. For every action from the USSR, there was a reaction of equal or greater proportions from the USA. Antagonism between the USSR and USA began as early as the end of the First World War. After Lenin's swift communist revolution, tensions grew between Russia and the West for Russia's retreat from the war. However, tensions mounted even further due to the fact that the allied forces fought in the civil war on the side of the anti-Bolshevik "Whites". Underlining discontent also increased after America entered World War Two. In the Teheran Conference, the USSR felt disappointed by Churchill and Roosevelt in their procrastination of allied support into France. This only served to heighten Stalin's paranoia. Hence, from this it could be argued that the individual figure of Roosevelt played a significant part in the escalation of the Cold War. ...read more.

Recent historical analysis of the Cold War has led some historians to argue that the character of Stalin himself serves as a huge reason why the Cold War actually began. It is true that Stalin was absolutist by nature, a man who had no capacity for compromise either in domestic politics or in dealings with foreign leaders. One particular example of this can be seen in Stalin's conduct when attempting to dominate Poland. Under Stalin's command, he forcibly removed one million Poles comprised of military and intellectual elites. The Soviet secret police dissolved any potential threat to Stalin by killing Polish intellectuals and by discarding them in the Katyn Forest. These measures were all taken in order to combat Stalin's fear of threat and opposition. Without the Polish intellectual elite, Poland would be far less likely to challenge Soviet domination. I would argue that it is Stalin's political history which had bred a certain sense of inevitability and unavoidability over the outbreak of the Cold War, deeming his role extremely significant. Controversial actions from the USA can also justify why America was as culpable if not more so for the Cold War than the USSR. America appeared as the only country in the world that made significant benefits from World War Two. This shift in world power meant that the USA held strong views about what the post-war world should consist of. ...read more.

One another key issue is how there was little evidence in 1945 that Stalin wanted to control Eastern Europe. This can be seen in how the Soviets did no oppose the dispatching of US marines to Manchuria and did not object to the American occupation of South Korea. As a purely ideological battle, the Cold War would not have amounted to anything of real significance. However, one of the defining aspects of the period was the catalyst of World War Two, which allowed for the manifestation of the two ideologies to collide together. With the increase in US power from 1945 and the mass destruction of Russia, both countries acted in different means to compete for influence in the same physical space. As a direct consequence of this, a clear pattern can be found through the meeting of a communist action with a capitalist reaction. For example, when the USSR set up communist governments without free elections in liberated countries, the USA developed a 'get tough' attitude supported by the Containment policy and the Truman Doctrine. I would argue, however, that it is too easy to state that the level of blame was an equal balance between both nations. Although this was partly true and although the Cold War would have occurred regardless of leader, the impact of Stalin provided the escalation of the 1940's that would not have been seen under any other leader. Stalin's history of despotism led to aggressive attempts at the expansion of communism throughout Europe; which ultimately forced America's hand to act. ?? ?? ?? ?? ...read more.