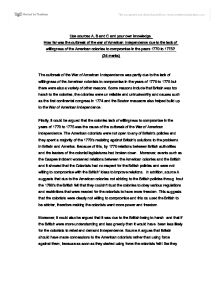 Use sources A, B and C and your own knowledge. How far was the outbreak of the war of American Independence due to the lack of willingness of the American colonies to compromise in the years 1770 to 1775?

only a reason for causing the War of American independence but also were risking an the French threat and not preparing for that. In addition, another reason for the outbreak of the War of American independence was that the British made some drastic mistakes and the colonies misunderstood what the British were trying to do and therefore retaliated more brutally than they should have. Firstly, there was the Boston massacre which was a big mistake from the British and the American colonists were not at all happy with the British after that happened in 1770. The Bostonians saw the 'massacre' as a huge attack from the British and retaliated as strongly as they could. They turned the funerals of the men who were shot into political demonstrations and made sure that the soldiers were put on trail for murder. This caused a great deal of tension between the British and the American colonies and the British believed that the colonists were taking it too far. ...read more.

This student answers the question very well by doing two things. Firstly, they use all three of the sources mentioned in the question, which is good because it shows they understand what other people have written and believed about the ...

This student answers the question very well by doing two things. Firstly, they use all three of the sources mentioned in the question, which is good because it shows they understand what other people have written and believed about the topic. They could improve by taking one or two important words from each source and quoting them in their essay: this would show they can select the most relevant parts of the source to analyse. The other way that the student answers the question is by discussing several different reasons for the outbreak of the War of Independence: this shows that they appreciate there is more than one opinion on what caused it. It's good that they have summarised these in their introduction, as it shows they can organise their knowledge.

The student does a lot of explaining why events happened or why they were significant, for example by using phrases such as 'This suggests...' This is better than only describing what happened during the war, because explaining it shows you have understanding and you aren't just writing down lists of memorised information. The evidence used in the essay is good: for example, in saying ''All the colonies except Georgia'', the bit ''except Georgia'' shows that they have a precise knowledge of what happened, and they are proving it by giving short but relevant detail. The conclusion of the essay could improve by adding the most important reason why they believe Britain was too harsh on the colonies, as this would show they can assess the arguments they have written to find the most relevant strengths.

The spelling, grammar and punctuation of this essay is excellent, which is good as it means the examiner can spend time marking the argument they have created rather than trying to work out what they mean. However, the student should take care when saying ''1760's'' or ''1770's'' as you don't need an apostrophe because you are saying something belongs to someone or missing out a letter, and a repeated mistake like this makes the essay look untidy.