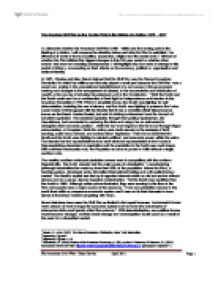 The American Civil War as the Turning Point in the Making of a Nation,

The American Civil War as the Turning Point in the Making of a Nation, 1815 -1917 To determine whether the American Civil War (1861-1865) was the turning point in the Making of a Nation, I will compare the situation before and after the War to establish the difference it made in terms of politics, economics, religion and the social order. I will look at whether the War initiated the biggest changes in this 100 year period or whether other events had more far-reaching consequences. I will highlight key moments of change in this period of history, commenting on their effects on the economy, political re-organisation and national identity. In 1927, Charles and Mary Beard claimed that the Civil War was the 'Second American Revolution' in which the military conflict only played a small part because the Civil War was a social war, ending in the unquestioned establishment of a new power in the government, making vast changes in the arrangement of classes, in the accumulation and distribution of wealth, in the course of industrial development, and in the Constitution..1 Both the North and the South could see it as a continuation of their fight for independence and freedom in the American Revolution (1775-1783). In simplistic terms, the South was fighting for self determination, including the use of slavery and the North was fighting to preserve the Union. Louis Hacker (1940) agreed with the Beards that it was a revolution (their ideas became known as the Beard-Hacker thesis), but said its striking achievement was the triumph of industrial capitalism. ...read more.

The Compromise allowed Congress to maintain representation from an equal number of free and slave states. The 1850 Compromise over whether new territories should or should not allow slavery followed the 1846-1848 Mexican War. California finally entered as a free state but the idea of popular sovereignty was introduced allowing states to decide themselves and this, with the accompanying Fugitive Slave Act, strengthened the North's resolve to support abolition. The Kansas Nebraska Bill in 1854 effectively overturned the Missouri Compromise and in the 1857 Dred Scott vs Sandford case, the Supreme Court ruled that the Missouri Compromise was unconstitutional and that Congress did not have the authority to prohibit slavery in territories. Laws that had been difficult to pass in the antebellum period due to southern opposition, were passed quickly during and immediately after the War. Lincoln was opposed to the expansion of slavery, but held that the federal government was prevented by the Constitution from banning slavery in states where it already existed. In 1862, Lincoln wrote to the editor of the New York Tribune, Horace Greely: My paramount object in this struggle is to save the Union, and is not either to save or to destroy slavery. If I could save the Union without freeing any slave I would do it, and if I could save it by freeing all the slaves I would do it6 However, Lincoln announced the formal freedom of all slaves in any of the rebellion (ie Confederate) ...read more.

In that sense it was a turning point. It brought an end to slavery and in that sense it was part of the progression towards equality and a turning point in the acceptance that wage labour was the way forward. By the end of the nineteenth century the USA was recognised as a global industrial power, while its natural resources (coal, timber, oil, farmland) and its infrastructure. Vast waves of immigrants provided the labour base for this increase in industry and agriculture. The distribution of power and wealth had changed but historians have argued that this would have happened through the growth of industrialisation and modernisation without the war. However, it is difficult to know how sectional interests would have been reconciled. Ironically, A. Smith in his book The American Civil War describes how the 1898 war against Spain was the symbolic moment of togetherness in which white northerners and white southerners fought together under the same flag..The cult of reunion was essentially an agreement by two parties in the Civil War.. to exclude the third party, black people, from the post-war settlement.11 He continues to describe the 'peace Jubilee' held in 1913 on the 50th anniversary of Gettysburg, where the surviving veterans, Confederate and Union, sang 'God Bless America' together. America continued to favour the White Anglo-Saxon Protestant male as it had always done; these were the men that were marked out for the 'manifest destiny' and were lauded for their valour and heroism. The social order did not really change as a result of the Civil War and there were many contextual factors which led to the continent of America emerging out of its colonial past. ...read more.