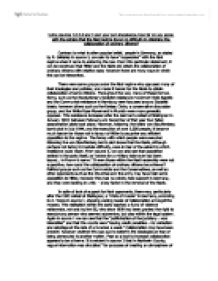 Using sources 1,2,3,4 and 5 and your own knowledge, how far do you agree with the opinion that the Nazi regime found no difficulty in obtaining the collaboration of ordinary citizens?

Using sources 1,2,3,4 and 5 and your own knowledge, how far do you agree with the opinion that the Nazi regime found no difficulty in obtaining the collaboration of ordinary citizens? Contrary to what is often popular belief, people in Germany, as stated by R. Gellately in source 5, are said to have "cooperated" with the Nazi regime when it came to enforcing the law. From this particular statement, it can be construed that Hitler and the Nazis did obtain the collaboration of ordinary citizens with relative ease; however there are many ways in which this can be interpreted. There were some groups under the Nazi regime who opposed many of their ideologies and policies, and made it harder for the Nazis to obtain collaboration of some citizens. Throughout the war, many of these formed. Some, such as the Revolutionary Socialist resistance movement Rote Kapelle and the Communist resistance in Hamburg were focussed around Socialist ideals; however others such as the Kreisau Circle, a conservative discussion group, and the White Rose Movement in Munich were more generally opposed. ...read more.

for defeatism and sabotage at the rate of a hundred a week." Collaboration may have been present; however whether this was due to belief in the ideologies or fear of being persecuted is another matter. Fear as a tool to increase collaboration appears to be a theme. It is evident in source 3 that in Northeim County, vague information was circulated "for purposes of creating an atmosphere of terror." Often, a fear of the unknown and lack of knowledge of reality increased the so-called popularity of the Nazis, with very little difficulty on their part, by simply intensifying the fear felt by ordinary Germans, and making them more willing to cooperate. We can also see from source 4 that there were Nazi informers in workplaces such as factories to try to suppress resistance to the regime. However, opposition did exist; in one case, "the man responsible for denouncing him was boycotted by the shop floor;" this happened particularly in older, established workforces. This source may be unreliable; being a socialist report, it would be trying to rally opposition. ...read more.

However some Protestants, under, among others, Martin Niemoller, broke away from the interference of the Nazis in the form of the Confessional Church. This shows an outright form of ordinary citizens not collaborating with the Nazis. It may have been difficult for the regime to keep such organisations under control, particularly in the pre-war years; but 1939 saw the abolishment of all religious schools and youth groups in Germany, meaning that for the most part, the Christian body was easier to control. It could be inferred that the Nazis did not have any difficulty in obtaining the collaboration of ordinary citizens, largely due to the apparent lack of opposition they faced, and the divisions within the groups that existed. Largely, however, it can be concluded that their "determined escalation of violence" as detailed by A. Tooze in source 1, was responsible for the levels of collaboration among the population at large. Events such the von Stauffenberg bomb plot, and the following preposterous execution of 5,000 people in a paranoid frenzy, show that violence and intimidation were the main tactics employed by the Nazis in order to obtain collaboration of those ordinary citizens who may or may not have been able to mount some form of effective resistance. ?? ?? ?? ?? ...read more.