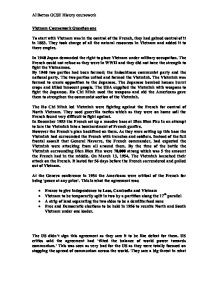 Vietnam Coursework Question one To start with Vietnam was in the control of the French, they had gained control of it in 1883

Vietnam Coursework Question one To start with Vietnam was in the control of the French, they had gained control of it in 1883. They took charge of all the natural resources in Vietnam and added it to there empire. In 1940 Japan demanded the right to place Vietnam under military occupation. The French could not refuse as they were in WWII and they did not have the strength to fight the Vietnamese. By 1940 two parties had been formed; the Indochinese communist party and the national party. The two parties united and formed the Vietminh. The Vietminh was formed to create opposition to the Japanese. The Japanese bombed houses burnt crops and killed innocent people. The USA supplied the Vietminh with weapons to fight the Japanese. Ho Chi Minh used the weapons and aid the Americans gave them to strengthen the communist section of the Vietminh. The Ho Chi Minh led Vietminh were fighting against the French for control of North Vietnam. ...read more.

along the 17th parallel * A strip of land separating the two sides to be a demilitarised zone * Free and Democratic elections to be held in 1956 to reunite North and South Vietnam under one leader. The US didn't sign this agreement as they saw it to be like defeat for them. US critics said the agreement had 'tilted the balance of world power towards communism.' This was seen as very bad for the US as they were totally focused on stopping the spread of communism across the world. They saw a big threat in what they named the 'Domino theory'. This meant that if one Asian country such as Thailand or Malaya became communist its neighbours would follow and spread it throughout the East. However the new ruler of the south, Ngo Dinh Diem, refused to hold the 1956 elections in Vietnam. He was unwilling to be the puppet rules that the Americans wanted but as he was against communism and was actively stopping the spread of it the Americans had no choice but to support him. ...read more.

His justification didn't come until the 6th February 1965 when the Vietcong attacked the US base at Pleiku, ten aircraft were destroyed and eight US 'advisors' were killed. This gave Johnson the excuse to bomb the north, on the 11th of February 1965 the US and the ARVN started bombing industrial targets such as bridges, railway lines and roads. This gave the Americans great confidence that the end of the conflict was near but they were still not allowed to bomb Hanoi and Haiphong, Vietnam's largest cities for fear of angering the Soviet Union. Not long after this 3500 marines were sent to the airbase of Danang and they were no longer called 'advisors' they were soldiers. This is when the Americans started to take control of the war effort. This was lead by Lieutenant General William Westmoreland. In December 1964 there were 16000 US soldiers in South Vietnam in 1966 there were 268000 and by 1968 thee were more than 500000. The US was too heavily involved in the mess of Vietnam to back out now. ?? ?? ?? ?? Al Barnes GCSE History coursework ...read more.