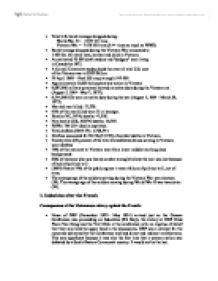 � The pentagon believed air mobility and extensive, superior firepower, technology and industrial might will prevail over the ill equipped North Vietnamese army. * The USA ended up fighting neither a conventional war against the NVA, nor a counterinsurgency war against the Vietcong, but a confusion of both. * General William Westmoreland commanded the US forces from 1965 to 1968 � his strategy was of attrition. His strategy was to bomb north Vietnam to cut off supplies to the South and to 'bleed' the population and economy until its leaders made peace on US terms. * From 1965, much of the bombing, artillery fire, napalm and rocket firing was directed into areas within South Vietnam in an effort to flush out the Vietcong. * Saigon Command said that the Vietcong could only be beaten by : obliterating their strategic base, the rural population. 6 times as many bombs were dropped in South Vietnam than North Vietnam. * Between 1961 1969 � USA used herbicides to defoliate the environment and wipe out crop supplies. * American Firepower from the air. B52 Bombers � strategic bombing and tactical support. Flying at 10,000 metres, they could drop 27 tonnes of bombs each sortie� phosphorus, napalm and anti personnel cluster bombs, hurling metal fragments or ball bearings. Seven thousand kilogram monster Daisy Cutter bombs � clearings of 100 metre diameter. C123s� used to spray herbicides (20% of South Vietnam's Jungle, 20 % of mangroves and 42% of food crops in nine years). The South Vietnamese Army * Desertion rate of 30% per annum, Americans described them as 80% ineffective in their operations. Search and Avoid Tactics * ARVN forces worked largely on pacification programmes before Vietnamisation� not considered reliable or efficient enough for joint operations. * Trained by Americans to rely on firepower, the ARVN became dependent on costly and sophisticated equipment. * Trained neither for conventional nor guerrilla warfare� ARVN remained a predominantly defensive force that was reliant on helicopters, air and artillery cover as well as American finance. ...read more.

Shocked by the capitalist nature of the city dwellers and the failure to socialise towns, the frustrated Pol Pot decided to send the entire population of the towns into the countryside. Those leaving were told that the evacuation was due to the threat of severe American bombing and it would last for no more than a few days. He wrote at the time "If the result of so many sacrifices was that the capitalists remain in control, what was the point of the revolution?" Their attempt to build socialism was based on the interrogation, torture and killings of Buddhist monks, Western-educated intellectuals, educated people in general, people who had contact with Western countries, people who appeared to be intelligent (for example, individuals with glasses), the crippled and lame, and ethnic minorities. Cambodia did not possess a working class, so they adopted the non-Marxist principle of the 'peasants' as the 'true working class'. In 1976 people were reclassified as full-rights (base) people, candidates and depositees - so called because they included most of the new people who had been deposited from the cities into the communes. Depositees were marked for destruction. Their rations were reduced to two bowls of rice soup, or "juk" per day. This led to widespread starvation. The Khmer Rouge also classified by religion and ethnic group. They abolished all religion and dispersed minority groups, forbidding them to speak their languages or to practise their customs. They refused international aid based on their principle of 'self-reliance', this decision proved to be a humanitarian catastrophe, millions died of starvation and brutal forced labour. Pol Pot's regime was extremely paranoid. People were treated as opponents based on their appearance or background. Torture was widespread. Phnom Penh was turned into a ghost city, while people in the countryside were dying of starvation, illnesses, or execution. By the time the Vietnamese intervened in late 1978 Cambodia had lost around 2 million people, or 30% of the total population. (Alternatively 1.4 million, 20%, source: Amnesty International) ...read more.