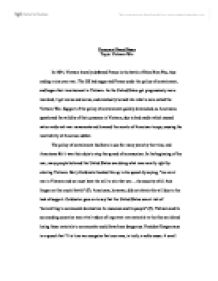 Document Based Essay Topic: Vietnam War In 1954, Vietnam brutally defeated France in the battle of Dien Bien Phu, thus ending a nine year war. The US had supported France under the policy of containment, and began their involvement in Vietnam. As the United States got progressively more involved, it got worse and worse, and eventually turned into what is now called the Vietnam War. Support of the policy of containment quickly diminished, as Americans questioned the validity of their presence in Vietnam, due to bad media which caused nation wide anti-war movements and lowered the morale of American troops, causing the inevitability of American defeat. The policy of containment had been in use for many years by that time, and Americans felt it was their duty to stop the spread of communism. In the beginning of the war, many people believed the United States was doing what was morally right by entering Vietnam. ...read more.

Many felt that President Johnson's reason for entering Vietnam was not a valid one. Earnest Evans claims that "the reason for the loss of public support for the Vietnam war was that the Unites States never had a convincing case for intervention in the first place" (T). Johnson's secretary of defense, Robert McNamara, stated that, "this important war must be fought and won by the Vietnamese themselves" (H). The American people did not find it comforting that the Secretary of Defense was against the war. Lewis H. Lapham writes, "...the war was never honestly declared and because, at the end of it nobody...could say why 58,000 American soldiers were dead and another 300,000 wounded" (B). The United States never officially declared a state of war on Vietnam therefore many Americans did not support the war. The Catholic Bulletin says that "our waging the war, not our losing it, disgraced us in the men's eyes...We tried to bend an ancient and civilized people to our will, and we failed..." ...read more.

An American soldier writes to his mother, "I tell you, it's horrible to read a paper and see our own people aren't backing you up" (K). this sentence singlehandedly illustrates the effect it had on the troops morale. Richard Nixon addressed all of this by saying, "...they saw much of it on television...many of who were seeing war for the first time were so shocked at what they saw that they said this war immoral when they really meant that all war was terrible" (G). The rising numbers of American fatalities and the awful media changed American's positions on the war. The combination of all the negative aspects of this war, eventually lead to the defeat of the United States. Though Americans supported the containment policy in the beginning, that support quickly expired, as people protested the cause for being in Vietnam, due to horrific media that decreased troop moral and caused anti-war movements; it was inevitable that the United States lose the Vietnam War. The war might have turned out differently if it had had the full support of the American people. ...read more.