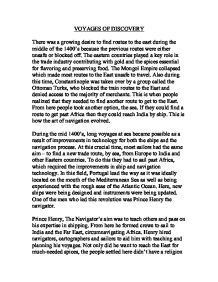 VOYAGES OF DISCOVERY There was a growing desire to find routes to the east during the middle of the 1400's because the previous routes were either unsafe or blocked off. The eastern countries played a key role in the trade industry contributing with gold and the spices essential for flavoring and preserving food. The Mongol Empire collapsed which made most routes to the East unsafe to travel. Also during this time, Constantinople was taken over by a group called the Ottoman Turks, who blocked the train routes to the East and denied access to the majority of merchants. This is when people realized that they needed to find another route to get to the East. From here people took another option, the sea. If they could find a route to get past Africa then they could reach India by ship. This is how the art of navigation evolved. During the mid 1400's, long voyages at sea became possible as a result of improvements in technology for both the ships and the navigation process. At this crucial time, most sailors had the same aim - to find a new trade route, by sea, from Europe to India and other Eastern countries. ...read more.

It was later re-named the Cape of Good Hope by the King John 11. This achievement made it possible for Vasco Da Gama to continue the expedition by sea to India. Da Gama took a different route to avoid any strong coastal currents. This route was a large arc that took the crew out to see without seeing land for three whole months. He brought his ships back near land at the Cape of Good Hope and then sailed northwards up the east coast of Africa to Mombassa where they took directions from the natives on how to get to India. This was the first trade route to India ever undertaken. Christopher Columbus as we all know discovered America but at the time he thought that he had discovered a trade route to the East. Columbus first went to sea at the age of 14. Once settled in Portugal, he married a woman of a noble background and had a son. When she died in 1485 Columbus and son Diego moved to Spain. Columbus had previously tried to convince the Portuguese king and Spanish monarchs to give him the right to obtain a grant to travel to Asia by traveling west, through the Atlantic Ocean. ...read more.

These men stayed at a fort named Navidad built especially for them. Columbus set sail for Spain in early 1943. Columbus returned with adequate discoveries but lacking in the spices, gold and silk as promised. On arrival in America, Columbus was quite friendly to the native Indians but some have said that brutality soon followed. When Columbus eventually approached King Ferninand and Queen Isabella, as part of the grant they promised that Columbus himself would govern all land discoveries. In 1943 Columbus set out on another journey, west this time, with 17 ships and 1200 crewmembers. Columbus was aboard the flagship the Marigalante. The purpose of this trip was to pick up the 40 crew members left at Navidad, to find the great riches which he believed to be in the Far East and most importantly to colonise America. On reaching Hispaniola where the Fort of Navidad was, Columbus found his crew dead and the fort destroyed. This had occurred because they had mistreated the natives. Columbus and his crew eventually overtook the island of Hispaniola after much resistance from the natives. This was the first colony governed by Columbus. The King and Queen had heard of the brutality and had concerns however, they allowed Columbus to return to Spain and encouraged him to continue with further explorations. ...read more.