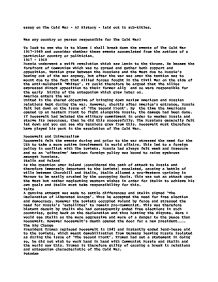 Was any country or person responsible for The Cold War?

essay on The Cold War - A2 History - laid out in sub-titles. Was any country or person responsible for The Cold War? To look to see who is to blame I shall break down the events of The Cold War 1917-1949 and consider whether these events accumulated from the actions of a particular country or politician. 1917 - 1919 Russia underwent a swift revolution which saw Lenin to the throne. He became the forefront of Communism which was to spread and gather both support and opposition. Tention grew between the Russians and the West due to Russia's bowing out of the war anyway, but after the war was over the tention was to mount due to the fact that Allied forces fought in the Civil War on the side of the anti-Bolshevik 'Whites'. It could therefore be argued that The Allies expressed direct opposition to their former ally and so were responsible for the early births of the antagonism which grew later on. America enters the war United in the shared objective of bringing down Nazism American and Russian relations kept during the war. ...read more.

Here I would see Stalin as the more aggressive and more of a danger to the peace than Roosevelt. However Roosevelt's death opened the door for a new president.......... The Big Change President Truman replaced Roosevelt in 1945 and instantly ended lend-lease aid to the Soviets, which meant demobilization from Germany leaving Russia isolated as during the issue of 'The Second Front'. Truman had set a statement in doing so, he did not wish to work hand in hand with Communist Russia and Stalin and the world saw this. Truman is therefore guilty of causing a break in relations and antagonism characteristic of The Cold War. Potsdam The agreements made concerned the occupation of Germany but they unraveled within a year showing that the two sides were unable to negotiate. 'Atomic Diplomacy' This was one week after Potsdam and saw America drop an atomic bomb on Hiroshima. The possession of the bomb was a widely discussed issue at the time and the historian Alperovitz suggests it caused Truman to take a tougher line against Communist Russia. ...read more.

A 'blank cheque' was offered to any country threatened by Communism, showing clear intolerance towards Russia. To argue in Stalin's defense, the Russians had no short term plans to obliterate capitalism, particularly in the East, but rather wished to go about living by their own ideals. However America constantly attempted to bring down Communism one way or another and frequently spoke out against Russia. The Marshall Plan offered aid to all European countries including Russia, but it was rejected by the Soviets who saw it as a direct attempt to turn people's faith back to Communism and so the tension only grew. In these instances I hold the opinion that America aggravated the issue and turned antagonism into The Cold War. Conclusion The mid twentieth century saw two superpowers dominating the world's politics with hugely differing ideals. However I feel that the friction got out of hand due to America's failure to accept another way of life other than Communism and Stalin's panaroia over America's ambitions. In my opinion The Truman Doctrine and The Marshall Plan were blatant attacks on Russia and Communism, and bring blame largely to America, and the contraverial Truman. Although I would not blame the whole conflict on Truman, I find his contribution a big one. ...read more.