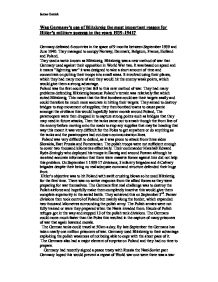 Was Germany's use of Blitzkreig the most important reason for Hitler's military success in the years 1939-1941?

Was Germany's use of Blitzkreig the most important reason for Hitler's military success in the years 1939-1941? Germany defeated 6 countries in the space of 9 months between September 1939 and June 1940. They managed to occupy Norway, Denmark, Belgium, France, Holland and Poland. They used a tactic known as Blitzkreig. Blitzkreig was a new method of war that Germany used against their opposition in World War two. It was based on speed and it means "lightning war" it was designed to take a short amount of time and concentrate on putting their troops into small areas. It involved using their planes, which they had many more of and they would hit the enemy weak points, which would give them a strong advantage. Poland was the first country that fell to this new method of war. They had many problems defending Blitzkreig because Poland's terrain was relatively flat which suited Blitzkreig. This meant that the first bombers could see their targets easily and could therefore be much more accurate in hitting their targets. They aimed to destroy bridges to stop movement of supplies; they then bombed towns to cause panic amongst the civilians this would hopefully lower morale around Poland, The paratroopers were then dropped in to capture strong points such as bridges that they may need in future attacks, Then ...read more.

The Germans also had a major element of surprise on Poland and they had no time to prepare. Germany had recently signed a peace treaty with Russia the Nazi-Soviet pact Germany hoped this would prevent a repeat of World war one were there was a war on two fronts it was also a key reason for Germany's success. The Germans did not have the men or the resources to fight a war on two fronts. This created time for the use of Blitzkreig. By using Blitzkreig less men and resources were used. The allies had five hundred and twelve thousand more men but had three hundred less aircraft than the Germans. The allies had to spread their troops while Germany also had better range on their guns and all-round had better tactics. They then moved across Europe and invaded Denmark. This was necessary to stop Poland gaining their supplies. The invasion of Denmark was less than twenty-four hours and there was not a shot fired this was because there was no resistance from the Danes as they were completely under prepared for an attack of any decent size. They invaded Norway at the same time but this time rather than Poland it was much easier as Norway had not been at war for over one hundred years and they were as under prepared as the Danes. ...read more.

The allies spread their tanks out more and did not use any formations and that would be more effective they also did not use there armoured formations very well, as they were not up to standard. The allies were not any were near as organised as the Germans were and they subsequently fell behind in terms of numbers and technology. In conclusion I think that Blitzkreig was one of the main reasons for Adolf Hitler's Military success between 1939-1941. In the above I have stated some of the reasons why Hitler had military success away from Blitzkreig and one of the reasons would be the sheer incompetents of their opposition and their opposition's allies. The men on the German side were very similar to those on the allies but it showed that Germany was more technologically advanced compared to the allies. Germany used their strengths to their opposition's weaknesses for example the speed of Blitzkreig to the in-ability for their opposition to mobilise. The use of Blitzkreig by Germany was a Very good indication of how they thought militarily thinking and that the use of it at the right times proved unbeatable. Hitler did have lots of military success between those years of 1939-41; inpart some of the sheer scale of Hitler's success is a result of the allied weaknesses but what my essay shows is that Blitzkreig was the main contributor to German military success. Word Count: 1329 James Gerrish ...read more.