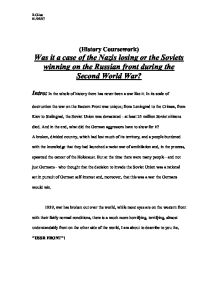 Was it a case of the Nazis losing or the Soviets winning on the Russian front during the Second World War?

(History Coursework) Was it a case of the Nazis losing or the Soviets winning on the Russian front during the Second World War? Intro: In the whole of history there has never been a war like it. In its scale of destruction the war on the Eastern Front was unique; from Leningrad to the Crimea, from Kiev to Stalingrad, the Soviet Union was devastated - at least 25 million Soviet citizens died. And in the end, what did the German aggressors have to show for it? A broken, divided country, which had lost much of its territory, and a people burdened with the knowledge that they had launched a racist war of annihilation and, in the process, spawned the cancer of the Holocaust. But at the time there were many people - and not just Germans - who thought that the decision to invade the Soviet Union was a rational act in pursuit of German self-interest and, moreover, that this was a war the Germans would win. 1939, war has broken out over the world, while most eyes are on the western front with their fairly normal conditions, there is a much more horrifying, terrifying, almost understandably front on the other side of the world, I am about to describe to you the, "USSR FRONT"! This enormous front was over three times the size of the Western front, a massive 1,600 kilometres. Even though the Germans used the same amount of troops on the Russian front as to the Western front, the space that was to be concerned was much larger, therefore the troops had to spread out more. ...read more.

Stalin justified the Russo-German Pact on the grounds that it gave the country the time to build its defences. Stalin also announced a "scorched earth" policy to deny the Germans "a single engine, or a single railway truck, and not a pound of bread nor a pint of oil." He also announced with "a feeling of gratitude" the offers of assistance from Britain and the United States. So desperate did the Russians become during the early stages of Operation Barbarossa to gain any support and assistance, they even signed an agreement with the Polish government-in-exile, with whom they were not in speaking terms since the Russian occupation of Eastern Poland in September, 1939. By the end of July the Germans controlled an area of the Soviet territory more than twice the size of France. Although Stalin knew of scouts and rumours on the Soviet border, he would not believe that the Germans, the ones that called for the pact in 1939, were preparing an attack! Villagers on the border of the soviet land could here the tank engines starting up as they slowly progressed through the forests. Stalin knew that it was reality but didn't want to believe it. The war on the U.S.S.R front had begun. On the 23rd of June 1941, Hitler ordered his troops to attack the fronts of Leningrad, Baltic Special, Western Special, Kiev Special and the Odessa Military Districts. At the same time as this was happening, Stalin was ordering his troops to mobilise and prepare for German attacks. But some divisions like the navy and some army generals did not take any notice of Stalin's orders, and the ones that did get through, were received at midnight when the Germans were already threatening the border settlements. ...read more.

Mean while, back in Britain, there was wondrous talk of the great comradeship and will that the Soviets gave, and that was shown in massive propaganda posters that the British government had put up to raise morale and say that the "old allies of Britain had come through again." Conclusion: All the above show that there was both massive advantages on both sides. But the winners are winners for a reason. The Soviet comradeship stuck together throughout, they faced some of the worst possible events that could've happened during the Second World War. Also the fact that the USSR called an agreement to the pact in the first place to buy time to build up the country and prepare it for war, proved to be very clever indeed. If you look at the above weapons production table" then you shall see that the Soviets kept building their army throughout. These were two massively important points for the Soviets, along with many others that I cant explain, (I'll probable get marked down for it). But the Germans did have their moments through out this massive war. Their world wide successful "Blitz Kreig" came through again as it did on the western front. And the start attacking strategies were also quite incredible. And the organised communication factors also play a huge part on the field. But over all, I don't at all think it was a case of the Germans winning or losing, it was the fact that the massive, great, legendary RED ARMY of the Soviet Union was unbeatable. So there I leave you with my answer to the pondered question of who won or failed, in the biggest war of all time, the EASTERN FRONT!!! R.Giles 01/05/07 ...read more.