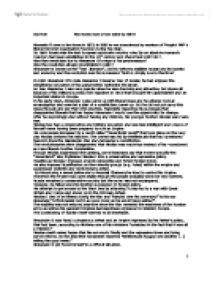 Lisa Poth Was Russia more or less stable by 1881? Alexander II came to the throne in 1855; in 1881 he was assassinated by members of "People's Will" a liberal terrorist organisation founded during his reign. By 1881 Russia was the last European autocratic country ruled by an absolute monarch. Tsardom had been established in the 16th century and should last until 1917. Was that revolution due to Alexander II's reign or his predecessors? Was the revolution already predictable in 1881? Alexander is known as the "Tsar Liberator", did his Reforms stabilize Russia and its society and economy and the revolution was his successors' fault or simply due to the time? In 1801 Alexander II's uncle Alexander I became Tsar of Russia; he had enjoyed the enlightened education of his grandmother Catherine the Great. As Tsar Alexander I was very popular since he was charming and attractive, but above all because of his military success over napoleon in 1815 that brought him appreciation and an important status in Europe. In his early reign, Alexander I also came up with liberal ideas and he allowed mutual emancipation and even let a plan of a constitution drawn up. But he did not put carry this ideas through and put them into practise. ...read more.

Unlike his predecessors he was willing to carry out necessary reforms. In 1861 millions of peasants were given their personal freedom allowing the development of industry such as coal, iron and cotton and the growth of the railway system. The Emancipation had successfully narrowed the gap between Russia and the West of Europe. To secure the order, Alexander II introduced the "zemstva" elected local councils with certain powers that carried out local government. The legal reforms of 1864 replaced the traditional Russian court system by a more western jury system with better trained judges and lawyers. This is considered as one of Alexander II's greatest successes since it worked out quite well and brought more justice into Russian courts. Besides these changes in legislative and judicative involved the "mid-class" (doctors, lawyers, nurses etc.) for the first time, since all classes could elect "zemstvo" members or be part of the jury. Alexander II managed to free the serfs without collapsing on the implications and ending up in a chaotic situation. The army reform in 1874 that re-organised army and navy and shortened the service length was the last step of responding to the issues of the Crimean defeat. But did Alexander II handle all issues successfully and stabilized autocracy? ...read more.

In fact, all his attempts to control and persecute opposition were not successful. He was finally assassinated by members of the terrorist organisation "People's Will" in 1881. Only this would be sufficient to tell Russia was less stable by 1881. Overall the economy was more stable as increasing and further developed though still wide behind Western standards. The army was better trained and organised as in the Crimean War and was more able to defend Russia. Russia now had a more Western society since abolished serfdom and introduced elected local councils and modernised courts. But it was still ruled by an absolute monarch; Alexander II had taken away fundamental elements of his autocratic rule but had failed to establish a modernised autocracy. The main indicator for this lack of stabilisation is the increasing opposition: Instead of strengthened autocracy he had unwillingly encouraged opposition; conservative by reforming at all and liberal opposition by "half-reforms" that desired for more. And even more, Alexander II enabled his "enemies" to act, by relaxed laws. The realisation came too late and his more repressive policy after 1866 only increased opposition. Despite the Crimean defeat it is justifiable that Russia was less stable by 1881 but due to other factors. Some historians even argue that without Emancipation there had not been a Russian revolution (as the peasantry was rarely involved). Considerable as Russia was not very stable by 1881. ?? ?? ?? ?? 1 ...read more.