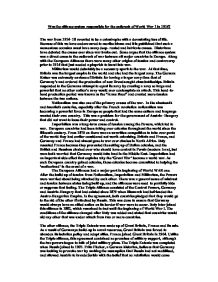 Was the alliance system responsible for the outbreak of World War 1 in 1914?

Was the alliance system responsible for the outbreak of World War 1 in 1914? The war from 1914- 18 revealed to be a catastrophe with a devastating loss of life. Because of this we have endeavoured to ascribe blame and it is publicized that such a momentous occasion must have many deep- rooted and intricate causes. Historians have debated the causes ever since war broke out. Some argue that the alliance system was a direct cause to the outbreak of war between all major countries in Europe. Along with the European Alliances there were many other origins of tension and controversy prior to 1914 that just needed a pinprick to burst into war. Militarism would debatably be a necessary spark to the war. At that time, Britain was the largest empire in the world and also had the largest navy. The German Kaiser was extremely envious of Britain for having a larger navy than that of Germany's and ordered the production of new Dreadnought-class battleships. Britain responded to the Germans attempt to equal its navy by creating a navy so large and powerful that no other nation's navy would ever contemplate an attack. ...read more.

The Triple Entente was completed when Russia joined in 1907. Fritz Fischer, a German historian, believes that Germany was looking to provoke war by making the assumption that Russia had not mobilised, and allowed Austria to invade Serbia with the belief that no retaliation would come from Russia. World War One spread because of the Alliance system; even with the tension build up it would've still been just another European war. The Balkan wars meant conflict between the two alliance systems. Austria Hungary and Italy were both upset because of the victory of the Balkan League as they were totally opposed to Serbia having an Adriatic coastline and instead supported the establishment of an independent Albania. However Russia and France supported the idea of a larger Serbia. In November 1912 both Russia and Austria-Hungary mobilized their troops to support and oppose Serbia respectively while Germany and Britain made an effort to moderate the demands of their allies. Russia was again forced to back down in the name of peace and Albania became and independent country. At this point individual previous rivalries such as Russia with Austria-Hungary had a dangerous effect on the situation of the two alliances as they were forced to support each one's allies, and at this point, a major conflict were the two systems confronted directly seemed just a matter of time. ...read more.

This was the point were all the tensions of the previous years were released as the members of both alliance systems declared war on the members of the other supporting their allies and causing a chain reaction of conflict. The alliances were of vital importance for the magnitude of World War I. The other factors have additionally proved to be significant, including nationalism, imperialism, militarism, the Moroccan crisis and the Balkans War. Even though they are not a solid reason themselves for the outbreak of war they are the key factor in the establishment of its parameters in its early days as the two fronts declared war on each other. If the alliances had included another configuration the outcome of the war would have certainly been different and most surely the number of lives lost and the arrangement of the European countries after it would have been entirely different as it was the balance of powers that extended the period of time of the war that was one thought to "be over by Christmas". It is therefore reasonable to suggest that the Alliance System was a significant cause of the war in Europe escalating into a world war. Although the immediate trigger of WWI was the assassination, the war would never have happened without the pre-war tension build-up. ...read more.