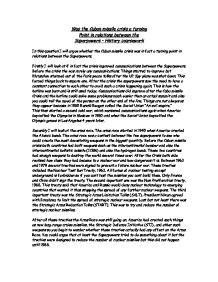 Was the Cuban missile crisis a turning Point in relations between the Superpowers?

Was the Cuban missile crisis a turning Point in relations between the Superpowers - History coursework In this question I will argue whether the Cuban missile crisis was in fact a turning point in relations between the Superpowers. Firstly I will look at if in fact the crisis improved communications between the Superpowers. Before the crisis the was rarely any communications. Things started to improve but Khruschev stormed out of the Paris peace talks after the U2 Spy plane was shot down. This forced things back to square one. After the crisis the superpowers saw the need to have a constant connection to each other to avoid such a crisis happening again. This is how the hotline was born and is still used today. Communications did improve after the Cuba missile Crisis and the hotline could solve some problems much easier then an actual summit and also you could tell the mood of the person on the other end of the line. ...read more.

These treaties included the Nuclear Test Ban Treaty, 1963. All forms of nuclear testing except underground is forbidden so if you cant test the missiles you cant build them. Only France and China didn't sign the treaty. The second important one was the Non Proliferation treaty, 1968. This treaty said that America and Russia would deny nuclear technology to emerging countries that wanted it thus stopping the spread of any further nuclear weapons. The third important treaty was the Strategic Arms Limitation Talks (SALT). President Nixon agreed with Brezhnez to limit the spread of strategic nuclear weapons. Last but not least there was the Strategic Arms Reduction Talks (START). This was to try and reduce the number of strategic nuclear missiles. After all these treaties the Arms Race was still going on. America had created such things as new long-range cruise missiles, the Strategic Defence Initiative (STI), and other such weapons so you begin to wonder whether those treaties actually had any affect on the Arms Race. ...read more.

Next I will talk about the policy of Dente. Brezhnez continued khruschev peaceful co-existence. In this policy Brezhnez began a number of talks with America. Dente was a lessening of tensions. Russia believed that if the two superpowers were in constant contact lessened the chance of a nuclear war. This meant trade could be established between the two superpowers and it also meant that Brezhnez could modernise the Soviet industry with American technology. This was a really significant because it shows the Superpowers putting aside their differences. This wasn't a complete break down of hostilities because a second cold war showing that not all the problems had been resolved. There was also other turning point such as Gorbachev wanting to end the arms race to put the funding into Russia domestically thus there was no need for an Arms race anymore. In my conclusion I think that the Cuban Missile Crisis was a turning point in relations between the two Superpowers because even though not all the problems were resolved I believe it was a huge step in the right direction to ending hostilities and the Cold War. ...read more.