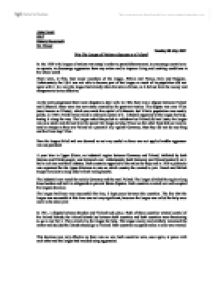 Was The League of Nationsa Success or a Failure?

Abdul Mufti 10. F History Homework Mr. Palmer Tuesday 08 May 2007 Was The League of Nations a Success or a Failure? In the 1920's the league of nations was setup in order to preach disarmament, to encourage countries to co-operate, to discourage aggression from any nation and to improve living and working conditions in the whole world. There were, at first, four major members of the league, Britain and France, Italy and Belgium. Unfortunately the USA was not able to become part of the league as much of its population did not agree with it. In a way the league had already taken the turn to failure, as it did not have the money and manpower to be too effective. As the years progressed there were disputes to deal with. In 1920, there was a dispute between Poland and Lithuania, these were two new states created by the post-war treaties. The dispute was over Vilna (now known as Vilnius), which was made the capital of Lithuania, but Vilna's population was mostly polish, in 1920 a Polish army rolled in and took control of it. ...read more.

Both of these countries wanted control of the Aaland Islands, the Aaland Islands lay between both countries and both countries were threatening to go to war for it. They called d to the league for help. The league slowly and carefully examined the matter and decided the islands should go to Finland. Both countries accepted and so a crisis was averted. This decision was very effective as there was no war, both countries were, once again, at peace with each other and the league had avoided using aggression. In 1923, one of the boundaries that were to be discussed after the war was the border between Greece and Albania. The conference of ambassadors were assigned the job and it appointed an Italian (Italy was Part of the League) general called Tellini to look over it. On August 27th, while the ambassadors were examining the Greek side of the frontier, Tellini and his team were attacked and killed. The Italian leader Mussolini was furious and demanded the Greeks be pay compensation to Italy and the murderers be executed. ...read more.

The league for once acted using force. "Make only slight resistance. Protect the refugees. Prevent the spread of panic. Do not expose the troops to unnecessary losses in view of the fact that the incident has been laid before the council of the league of nations, which is expected to stop the invasion." The league condemned Greece's actions and ordered it to pay compensation to Bulgaria. Faced with disapprovals from major powers in the league Greece obeyed. This dispute was handled effectively however not all the countries, evidently, had disarmed. The league was not trusted again by Greece as it had complained "There seems to be one rule for the larger states (such as Italy) and another for the smaller ones (such as themselves)" In my opinion the league was not a success nor was it a failure. However it is reckoned a failure as there was not enough money and manpower to back it up. Had USA been a part of the league, it may have been a success, but the population complained about the possibility of deaths. Anti French/ British also did not want to help the British and French empires, though it was nothing about them. ...read more.