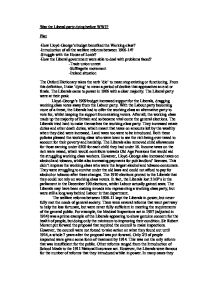 Was the Liberal party dying before WW1?

Was the Liberal party dying before WW1? Plan -How Lloyd-George's budget benefited the Working class? -Introduction of all the welfare reforms between 1906-14? -Struggle with the House of Lords? -How the Liberal government were able to deal with problems faced? -Trade union unrest -Suffragette movement -Ireland situation The Oxford Dictionary takes the verb 'die' to mean stop existing or functioning. From this definition, I take 'dying' to mean a period of decline that approaches an end or finale. The Liberals came to power in 1906 with a clear majority. The Liberal party were at their peak. Lloyd-George's 1909 budget increased support for the Liberals, dragging working class votes away from the Labour party. With the Labour party becoming more of a threat, the Liberals had to offer the working class an alternative party to vote for, whilst keeping the support from existing voters. After all, the working class made up the majority of Britain and so became vital come the general elections. The Liberals tried hard to make themselves the working class party. They increased estate duties and other death duties, which meant that taxes on amounts left by the wealthy when they died were increased. Land taxes too were to be introduced. Both these policies pleased the working class who were keen to see the rich being over-taxed to account for their poverty and hardship. The Liberals also removed child allowances for those earning under �500 for each child they had under 16. ...read more.

They would only agree to this if they were under pressure. However, the King was a possible threat to this. He could create enough Liberal peers for the Liberals to have a majority for any Liberal bill, if he were willing. The King at the time was Edward VII and he was willing providing that Asquith put forward a particular 'project' for Lords reform to voters in an election. The Liberals could have their peers providing the won another election on the basis of the 'project.' Inconveniently Edward VII then died. The new King, George V, promised Asquith the same conditions that Edward had made. A Second General Election was called in December 1910 that produced a similar result to January. George V promised to create the peers if they were needed, and Asquith brought in a bill to remove the Lords' power to veto new laws. The defeat of the House of Lords was arguably one of the Liberals' greatest achievements during their 1906-14 reign. On the other hand, the Liberals lost a lot of support from upper class members that saw the defeat of the Lords as an attack on them. Many people including many famous historians believed that the Liberals were turning more to the working class for support and leaving their own middle class supporters. I take the view that the Liberal party was not dying before World War 1. Dying indicates that the Liberals were ready to fold as a party and stop functioning. ...read more.

Now the risk could be taken - indeed, it had to be if the budget were to be saved. There followed a general election in January 1910 which was virtually a referendum on the budget and the peers. The Liberals' success at this election had important implications for all the other parties. Although the Conservatives recovered some of the votes lost in 1906, their gamble had clearly failed and the peers reluctantly swallowed the budget they had so vociferously condemned a few months earlier. Even worse, they now realised that Lloyd George had defeated their tariff reform strategy by proving that by widening the tax base the country could enjoy social reforms and a stronger navy on the one hand while retaining the benefits of free trade on the other. As a result the Conservatives began to fall into disarray over protectionism. Some questioned whether it was sensible to stick to a policy that had alienated working-class voters and thus threatened to keep them in opposition indefinitely. In a rather different way the Labour party had also been trapped by the budget strategy, for Ramsay MacDonald and his colleagues fully supported the taxation of wealth and the attack on the House of Lords. This logically meant that the electoral pact with the Liberals must be continued in the 1910 elections. But while the pact ensured a secure group of 40 MPs for Labour, it also made it very difficult to grow beyond that point. No longer was there any danger of Labour outflanking the Liberals, and it is significant that no further gains were made even in by-elections. ...read more.