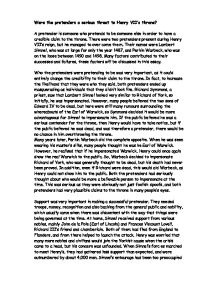 Were the pretenders a serious threat to Henry VII's throne?

Were the pretenders a serious threat to Henry VII's throne? A pretender is someone who pretends to be someone else in order to have a credible claim to the throne. There were two pretenders present during Henry VII's reign, but he managed to over come them. Their names were Lambert Simnel, who was at large for only the year 1487, and Perkin Warbeck, who was on the loose between 1490 and 1498. Many factors contributed to their successes and failures, these factors will be discussed in this essay. Who the pretenders were pretending to be was very important, as it could entirely change the credibility to their claim to the throne. In fact, to increase the likelihood that they were who they said, both pretenders ended up masquerading as individuals that they didn't look like. Richard Symmons, a priest, saw that Lambert Simnel looked very similar to Richard of York, so initially, he was impersonated. However, many people believed the two sons of Edward IV to be dead, but here were still many rumours surrounding the whereabouts of the Earl of Warwick, so Symmons decided it would be more advantageous for Simnel to impersonate him. If the public believed he was a serious contender for the throne, then Henry would have to take notice, but if the public believed he was dead, and was therefore a pretender, there would be no chance in him overthrowing the throne. Many years later, Perkin Warbeck did the complete opposite. ...read more.

His main Irish benefactor was the Earl of Desmond, but this is still very limited. Both the pretenders got much backing from Margaret of Burgandy, the sister of Richard III and Edward IV, who despised Henry. For Lambert Simnel, Margaret provided 2,000 professional German soldiers, and also Martin Schwarz as a commander, to fight on his behalf, which was a large amount of Simnel's forces. She also offered a place to stay for English nobles who had turned against the king and fled the country. Margaret offered Perkin Warbeck refuge, and tutored him in the ways of the Yorkist court, which he needed to know thoroughly to pass as Richard. She also acknowledged him as her nephew. Simnel gained no other foreign support, but Warbeck was recognised as Richard of York by Charles VIII of France and also Maxamillion, the Holy Roman Emperor. This made his threat to the throne far more serious as he had recognition all over Europe, and also from Scotland. James IV of Scotland also recognised Warbeck as who he claimed to be. He gave Warbeck his cousin to marry, which meant he was legitimately part of the Scottish royal family, and an even more serious threat to Henry. James also gave Warbeck troops for an invasion of England. Although Warbeck received much support, it all came at different times, and there was not enough support from just one person to complete his mission. Even though Simnel had a smaller support basis, all events happened in a very short period, and therefore made him much more dangerous. ...read more.

There was no other distraction at the time, so all eyes were on the difficulties in England. This meant Henry was in a weak position, and susceptible to a foreign invasion. Luckily he was saved from this problem, when Charles III invaded Italy. Warbeck also threatened a marriage agreement with Henry's heir Arthur, Prince of Wales. Again this was resolved when a truce with Scotland was arranged. There were also difficulties with traitors in the nobility, but improved spy networks meant this problem was not as serious as before. The final worry with Warbeck was that he was at large for eight years. This meant Henry was more inclined to risk more to capture him. Simnel was more a threat in this instance, as Henry had never dealt with this kind of problem before, and problems with Warbeck were resolved more effectively and quickly. Overall, the two pretenders were potentially serious threats to Henry, they had many forms of support, and their claims seemed legitimate to most. However, because of Henry's quick and decisive reactions, and his willingness to learn from previous experiences, he managed to hold his position as king and make England stable once again. If the social situation had been different, if there was public discontent towards Henry, then both the pretenders would have had a far better chance in succeeding, as their main downfall was in not gaining enough support from the general public. Simnel was a more serious threat to the throne as he had the element of surprise and speed - Henry had never encountered a pretender before, and all of his support came quickly, and at the right time. ...read more.