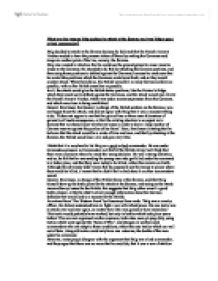 What are the reasons Haig decided to attack at the Somme and was Haig a good or bad commander?

What are the reasons Haig decided to attack at the Somme and was Haig a good or bad commander? Haig decided to attack at the Somme because he believed that the French Army at Verdun needed to have the pressure taken off them by making the Germans send troops to another point of the line, namely, the Somme. Haig also wanted to attack so that he could use the ground gained to cause massive losses to the Germans. He intended to do this by attacking the German positions, and then using those positions to defend against the Germans, because he made sure that he would take positions which the Germans would want back, and so they would counter-attack. When they did so, the British would kill as many German soldiers as possible, with as few British casualties as possible. In all, the attack would give the British better positions, like the Poziere's Ridge, which they could use to defend against the Germans, and the attack would also relieve the French Army at Verdun, which was under enormous pressure from the Germans, and which was close to being annihilated. ...read more.

He was a strong Christian, and so, he felt that he was sending the young men who got killed under his command to a better place, and that they were lucky to be killed, rather than remain on Earth. Although this obviously didn't mean that he purposely sent his troops to places where they would be killed, it meant that he didn't feel as bad about it as other commanders would. General Rawlinson, in charge of the British forces at the Somme, said that Haig himself drew up the battle plans for the attack at the Somme, and seeing as the attack incurred heavy losses for the British, this suggests that Haig either wasn't a good battle planner, or that he didn't collect enough information about the German defences that would lead to a success for the British. An extract from 'The Western Front' by Rosemary Rees reads: 'Haig was a cavalry officer. He did not understand how to fight a war with infantrymen. ...read more.

I have to disagree with this, and argue that it was because of many other important factors that Germany lost World War One, the top five being those listed below: *The Failure of the Schlieffen Plan *The Supremacy of the British Navy *The entry of the USA into the war in 1917 *The Introduction of the tank *The failure of the 1918 German Offensive I believe that these factors, along with the determination of the Allied armies brought about the end of World War One, and not the good leadership (if there was any) of Fieldmarshal Haig. I still hold my view that it is hard to say for definite whether Haig was a good or bad commander because of the pressure that he was under, but if I had to choose, I would have to say that he ignored the new tactics, the 'fighting dirty' which the Germans had introduced, and so his old-fashioned tactics condemned hundreds of thousands of British soldiers to their deaths. ...read more.