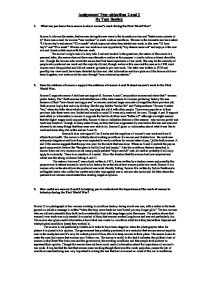 What can you learn from source A about women's work during the First World War?

1. What can you learn from source A about women's work during the First World War? Source A informs the reader, that women during the war were in the domestic service and "hated every minute of it," there was a need for women "war workers" in work such as munitions. Women in the domestic service worked "15 hours day's and earned "�2 a month" which improved when they started war work, in this case "12 hour day's" and "�5 a week." Women saw war work as a new opportunity "my chance came out" and enjoyed the new role and freedom that came with the war work. The source's origin was of a lady who lived and worked in the great war, the nature of the source is a personal letter, the source does not have any alternative motive as the purpose is just to inform a friend about the war. Though the women who wrote the source had first hand experience of war work. She may be the minority of people who preferred war work and the majority did not, though we know this was mot the case as in 1918 most women were disappointed and did not want to go back to pre-war work. The letter was written in 1976 and possibly her view could have been distorted by time and vital information and her opinions of the time could have been forgotten, war work could be seen through "rose coloured spectacles." ...read more.

Many other sources support this "when the men came back women were expected to go back to their old jobs," G Thomas, life on all fronts gives similar information as source D Source E is poster issued by the British government in 1916 to encourage women to enrol and do war work in munitions factories. It is a picture of a woman putting on a work jacket in the background, men waving getting on a train bound for the war. The caption at the top of the poster states "these women are doing their bit" and at the bottom it reads "learn to make munitions." This is a useful source as it shows techniques used to get women to work buy trying to create a good public image, with a good looking healthy women helping to do war work. The background of men going to war implies working was as important as fighting and that by working they would help their men win the war. The source reads learn to make munitions and not other things, as these were important to the war implying that so was the women's work. Source E is not particularly reliable as it is "government propaganda" and is a picture directly effected by the government. The source has important uses as it gives a message that women's war work is that important it could be a deceive factor in wining the total war and that not enough women worked as they needed to recruit. ...read more.

Nursing was common for women to work as and helped put more injured men back at the front-line increasing the chance of victory. Work in the armed forces in secretarial jobs freed up many men to go and fight also women worked on aircraft and similar things as indicated in source B this was important as recognisance flying gave much needed information about the enemies position to the commanders. All these occupations directly effected the war but the land girls who worked to produce food played a pivotal role in keeping up the home front. At the end of the war one of the main reasons for the German surrender is because of food shortages brought about by the British naval blockade. Women also worked in transport and other jobs to keep the country running smoothly as source I suggests they became "familiar figures" Though women made a difference the role of women could be perceived as not important and that the fighting in France was the deciding factor, also during the battle of the Somme the women's poor training led to "a third of the 1.5 million shells fired being duds." Though it was the military that eventually won the war, in my opinion without the women's war work on the home front prevented a implosion of the country leading to possible revolts e.g. Russia and the women freed many men go to the front line though due to poor tactics they had no substantial presence ...read more.