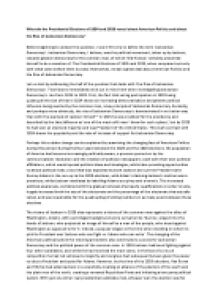 What do the 1824 and 1828 Presidential Elections reveal about Politics in the United States and about the Rise of Jacksonian Democracy?

During the four years between the 1824 and the 1828 elections, the population of America had become increasingly politically aware, a process spurred on by the communications revolution and the creation of partisan newspapers, each with their own political affiliations, which would spread political ideas and ideologies, whilst also providing opportunities to attack political rivals, a tool that was exploited by both Jackson and current President John Quincy Adams in the run-up to the 1828 elections, with Adam?s claiming Jackson?s mother was a prostitute, whilst Jackson retaliated by labelling Adams as a pimp and a heretic. This increased political awareness, combined with the gradual removal of property qualifications in order to vote, hugely increased both the size of the electorate and the percentage of the electorate that actually voted, and was responsible for the quadrupling of voting numbers in as many years between these elections. ...read more.

However, by the time of the 1828 elections, Van Buren and Ritchie had aided Jackson in successfully creating an alliance of the planters of the south and the plain men of the north, creating a renewed Republican Party and initiating a two party political system. With just one other real presidential candidate rival, whoever won the election was far more likely to achieve a majority and thus not rely on congress for election. Given Jackson?s huge popular support, he obtained a 59% majority in 1828 and was elected to Presidency ? the two party system had finally let the voice of the people be heard. In conclusion, the elections of 1824 and 1828 reveal a great deal about the continued democratisation of American politics, and the resultant increased political voice of the common man, which paved the way for the rise of Jacksonian democracy. ...read more.