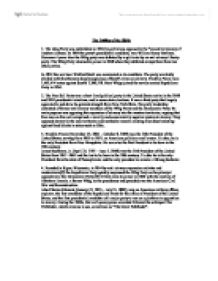 The Politics of the 1850s 1. The whig Party was established in 1834 by politicians opposed to the "executive tyranny of Andrew Jackson. In 1840 the party's presidential candidate, was William Henry Harrison. However 4 years later the Whig party was defeated by a split vote by an anti-slavery Liberty party. The Whig Party returned to power in 1848 when they defeated competition from two other parties. In 1852 the war hero Winfield Scott was nominated as its candidate. The party was badly divided with Southerners deeply suspicious of Scott's views on slavery. Franklin Pierce won 1,601,474 votes against Scott's 1,386,578. Most Whigs joined the newly created Republican Party in 1854. 2. The Free Soil Party was a short-lived political party in the United States active in the 1848 and 1852 presidential elections, and in some state elections. It was a third party that largely appealed to and drew its greatest strength from New York State. The party leadership consisted of former anti-slavery members of the Whig Party and the Democratic Party. ...read more.

as the principal opposition to the Democratic Party.[10] It first came to power in 1860 with the election of Abraham Lincoln, a former Whig, to the presidency and presided over the American Civil War and Reconstruction. John Charles Fr�mont (January 21, 1813 - July 13, 1890), was an American military officer, explorer, the first candidate of the Republican Party for the office of President of the United States, and the first presidential candidate of a major party to run on a platform in opposition to slavery. During the 1840s, that era's penny press accorded Fr�mont the sobriquet The Pathfinder, which remains in use, sometimes as "The Great Pathfinder". 5. The Kansas-Nebraska Act of 1854 created the territories of Kansas and Nebraska, opened new lands, repealed the Missouri Compromise of 1820, and allowed settlers in those territories to determine if they would allow slavery within their boundaries. The initial purpose of the Kansas-Nebraska Act was to create opportunities for a Mideastern Transcontinental Railroad. ...read more.

The real issue in this controversy is the sentiment on the part of one class that looks upon the institution of slavery as a wrong, and of another class that does not look upon it as a wrong. One of the methods of treating it as a wrong is to make provision that it shall grow no larger. Abraham Lincoln, speech at Quincy, Illinois (1858) We have in this nation the element of domestic slavery. The Republican Party think it wrong - we think it is a moral, a social, and a political wrong. We think it is wrong not confining itself merely to the persons of the States where it exists, but that it is a wrong which in its tendency, to say the least, affects the existence of the whole nation. Because we thing it wrong, we propose a course of policy that shall deal with it as a wrong. We deal with it as with any other wrong, insofar as we can prevent it growing any larger, and so deal with it that in the run of time there may be some promise of an end to it. ...read more.