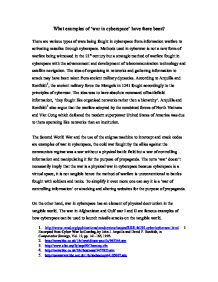 What examples of 'war in cyberspace' have there been?

What examples of 'war in cyberspace' have there been? There are various types of wars being fought in cyberspace from information warfare to activating missiles through cyberspace. Methods used in cyberwar is not a new form of warfare being witnessed in the 21st century but a strategic method of warfare fought in cyberspace with the advancement and development of telecommunication technology and satellite navigation. The idea of organising in networks and gathering information to attack may have been taken from ancient military dynasties. According to Arquilla and Ronfeldt1, the ancient military force the Mongols in 1241 fought accordingly to the principles of cyberwar. The idea was to have absolute command of battlefield information, 'they fought like organised networks rather then a hierarchy'. Arquilla and Ronfeldt1 also argue that the warfare adopted by the combined forces of North Vietnam and Viet Cong which defeated the modern superpower United States of America was due to them operating like networks than an institution. The Second World War and the use of the enigma machine to intercept and crack codes are examples of war in cyberspace, the cold war fought by the allies against the communists regime was a war without a physical battle field but a war of controlling information and manipulating it for the purpose of propaganda. ...read more.

The first Gulf war was labelled the first information war, at the time few had heard of the term information warfare (IW) with remarkable speed thereafter the term became a central concept in the American strategic thought (Rathmell 2002:p221). In the first Gulf war the American forces attacked the communication infrastructure of Iraq destroying most of its transmitters and telecommunication infrastructure, without a telecommunication apparatus the Iraqi military and it's hierarchical based military force thrown into chaos which meant the American forces could attack Iraq knowing minimal attacks would be co-ordinated against them. Leading up to the first gulf war hackers were employed by the American military to hack into the Iraqi information systems (McGuire 2005: lecture 7). This example explains how Net warfare and cyber warfare carried out on cyberspace had a direct impact in the physical world. Another example of war in cyberspace is the conflict between China and Taiwan2, in the year 2000 Chinese hackers vandalised many government websites of Taiwan. And in retaliation the Taiwanese hackers plastered china's railway ministry with pictures of the Taiwanese flag and the national anthem. After the incident the Taiwanese government respondent by saying 'they have learnt the lessons of previous attacks and are now on a constant state of alert for signs of interference'. ...read more.

state to groups vs. state and groups vs. corporations. War in cyberspace has become an important frontier in fighting one's enemies because of the ever increasing use of networks and serves providing entry point to cyberspace. In the year of 20045 the number of virus grew by 50%, the top ten virus were: (1) Netsky-P (2) Zafi-B (3) Sesser (4) Netsky-B (5) Netsky-D (6) Netsky-Z (7) My Doom-A (8) Sober I (9) Netsky-C (10) Bagle- AA, source: Sophos cited in http://newswww.bbc.net.uk/1/hi/technology/4105007.stm. The rise of viruses indicates that the 'war in cyberspace' is being enhanced and sophisticated with ammunitions that can attack and infect enemy networks via cyberspace. 'War in cyberspace' splits warfare into two categorise the physical war involving soldiers and tanks and the second frontier is Cyberwar. The increasing use of artificial intelligences and the development of robots transform warfare totally because cyberspace would be used to command the robots and missiles will be launched via cyberspace hence the virtual space will enable physical destruction of the tangible world. Example of such robot aided warfare is been witnessed in gulf war II in faullija, where intelligent gathering is carried out by robots. http://news.bbc.co.uk/1/hi/world/americas/4199935.stm According to Arquilla and Ronfeldt1, 'war in cyberspace' is an innovation in warfare they suggest that Cyberwar may be to the 21st century, what blitzkrieg was to the 20th century. 'War in cyberspace' is an innovation of having superior command, control, communication and intelligence and trying to locate, read, surprise and deceive the enemy. ...read more.