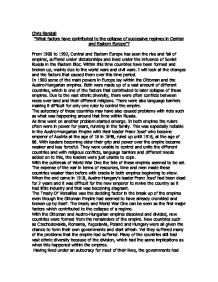 What factors have contributed to the collapse of successive regimes in Central and Eastern Europe?

Chris Randall "What factors have contributed to the collapse of successive regimes in Central and Eastern Europe"? From 1900 to 1992, Central and Eastern Europe has seen the rise and fall of empires, suffered under dictatorships and lived under the influence of Soviet Russia in the Eastern Bloc. Within this time countries have been formed and broken up, mainly due to the world wars and civil wars. I will look at the changes and the factors that caused them over this time period. In 1900 some of the main powers in Europe lay within the Ottoman and the Austro-Hungarian empires. Both were made up of a vast amount of different countries, which is one of the factors that contributed to later collapse of these empires. Due to the vast ethnic diversity, there were often conflicts between races over land and their different religions. There were also language barriers making it difficult for only one ruler to control the empire. The autocracy of these countries may have also caused problems with riots such as what was happening around that time within Russia. As time went on another problem started emerge. In both empires the rulers often were in power for years, running in the family. ...read more.

With Hitler controlling Central and Eastern Europe, the people living in these countries were subjected to the hash dictatorship of the Nazis and they didn't realise that they wouldn't gain independence to govern themselves again until the late 1980's. During World War Two, industry would have suffered again because although Germany would have provided most of the industrial output, the invaded countries would have supplied armaments as well. This meant that the industry would have been focused on weapons manufacture, leaving the countries in a dire position at the end of the war, needing basic raw materials, food and other domestic goods. The end of the war saw another regime fall out of power. With Nazi Germany losing the war, all its power was taken from them, with the USSR liberating most of the countries in East Europe apart from Yugoslavia which, through an uprising, saw it liberate itself. Stalin was quoted by saying "we have what we hold". Stalin believed the USSR was entitled to remain in the countries they had liberated as they wanted to create a buffer zone as protection from Germany. He was able to do this with the help of the Red Army, which was already situated in these countries, and by placing Stalinists in the existing Communist Parties. ...read more.

His policies of 'Perestroika' and 'Glasnost' effectively allowed these countries to decide their own way of being governed without any consequences from the Warsaw Pact or the USSR, leaving Communism to collapse and Russia able to try and rebuild and reconstruct its industry. One by one these countries overturned the Communist governments and replaced them with their own. This occurred all over the Eastern Bloc over a period of a few months in late 1989. This enabled countries to decide their own fate with the most notable change coming in 1992 from Czechoslovakia when it divided into two countries, the Czech Republic and Slovakia. Through revolts, stagnant economies and the end of the Cold War, Central and Eastern European countries were able to gain their freedom and democracy. The main factors which have contributed in collapsing successive regimes seem to be the two world wars, suffering industries and economies and ageing/stagnant policies and leaders. With ethnic diversity throughout, regimes have failed to maintain power over the collective countries. Now countries which were once deemed by the West to be backwards and involved with the USSR, such as the Czech Republic and Poland, are now hoping to join the E.U in 2004, with other countries like them in Central and Eastern Europe hoping to join at a later date. ...read more.