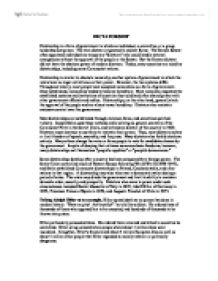 DICTATORSHIP Dictatorship is a form of government in which an individual, a committee, or a group holds absolute power. The term dictator originated in ancient Rome. The Roman Senate often appointed individuals as temporary "dictators" who could handle national emergencies without the approval of the people or the Senate. But the Roman dictator did not have the absolute power of modern dictators. Today, many countries are ruled by dictatorships, including some Communist nations. Dictatorship is similar to absolute monarchy, another system of government in which the rulers have no legal restrictions on their power. However, the two systems differ. Throughout history, most people have accepted monarchies as a form of government. Once established, monarchies tended to become hereditary. Most monarchs respected the established customs and institutions of countries they ruled and often shared power with other government officials and nobles. Dictatorships, on the other hand, generally lack the approval of the people and are almost never hereditary. Dictators also maintain exclusive control over the government. ...read more.

Hitler set up concentration camps where about 4 million Jews were murdered. Altogether, Hitler's forces killed about 6 million European Jews as well as about 5 million other people that Hitler regarded as racially inferior or politically dangerous. Adolf Hitler began his rise to political power in 1919, the year after World War I had ended. The German Empire had been defeated, and the nation's economy lay in ruins. Hitler joined a small group of men who became known as Nazis. He soon became their leader. Hitler and his followers believed he could win back Germany's past glory. He promised to rebuild Germany into a mighty empire that would last a thousand years. Many people did not take Hitler seriously. But his fiery words and brilliant blue eyes seemed to hypnotize those who listened to him. Many Germans believed he was their protector and friend. His emotional speeches made crowds cheer "Heil, Hitler!" ("Hail, Hitler!" ). Hitler became dictator of Germany in 1933 and quickly succeeded in regaining some territories taken from Germany as a result of World War I. ...read more.

He dreamed of building Italy into a great empire, but he led his nation to defeat in World War II (1939-1945) and was executed by his own people. Fascist dictator. In 1919, Mussolini founded the Fasci di Combattimento (Combat Groups). This movement appealed to war veterans with a program that supported government ownership of national resources and that put the interests of Italy above all others. In 1921, he transformed the Fasci into the National Fascist Party, adopting a more conservative program to gain the support of property-owning Italians. The Black Shirts, armed squads who supported Mussolini, used violence to combat anti-Fascist groups. In 1922, the Black Shirts staged a March on Rome and forced King Victor Emmanuel III to appoint Mussolini prime minister. In 1925, Mussolini declared a dictatorship. He abolished other political parties and imposed government control on industry, schools, and the press and police. In 1929, he signed agreements that settled long-standing disputes between the government and the Roman Catholic Church. He also sought to make Italy a corporate state, in which the government would help resolve disputes between employers and workers. The powerful Mussolini was called Il Duce (The Leader). ...read more.