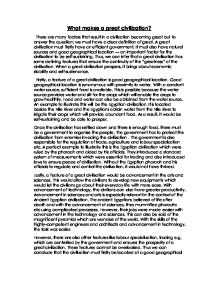 What makes a great civilisation

As a result, it would be self-sustaining and be able to prosper. Once the civilisation has settled down and there is enough food, there must be a government to organise the people. The government has to protect the civilization from enemies invading the civilization. The government is also responsible for the regulation of trade, agriculture and labour specialization etc. A perfect example to illustrate this is the Egyptian civilization which were ruled by the pharaoh and aided by his officials. They introduced a standard system of measurements which were essential for trading and also introduced laws to ensure peace of civilisation. Without the Egyptian pharaoh and his officials to regulate and control the civilization, it would not have thrived. ...read more.

The ancient Egyptians believed of life after death and with the advancement of sciences, they mummified pharaohs etc using complicated processes. However, their jobs were made easier with advancement in the technology and sciences. This can also be said of the magnificent pyramids which are wonders of the world. With the skills of the highly-competent engineers and architects and advancement in technology, the task was easier. However, there are also other features like labour specialization, trading e.g. which are controlled by the government and ensures the prosperity of a great civilization. These features cannot be overlooked. Thus we can conclude that the civilization must firstly be located at a good geographical location followed by having an efficient government and lastly having advancement in science and technology in order to be considered a great civilization and be self-sustaining. ...read more.