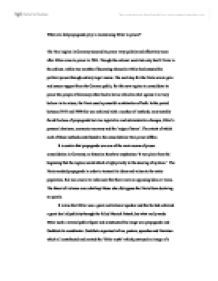 What role did propaganda play in maintaining Hitler in power?

What role did propaganda play in maintaining Hitler in power? The Nazi regime in Germany secured its power very quickly and effectively soon after Hitler came to power in 1933. Though the national socialists only had 3 Nazis in the cabinet, within two months of becoming chancellor Hitler had ensured his political power through entirely legal means. The next step for the Nazis was to gain and ensure support from the German public, for this new regime to consolidate its power the people of Germany either had to be too afraid to rebel against it or truly believe in its values, the Nazis used a powerful combination of both. In the period between 1933 and 1939 this was achieved with a number of methods, most notably the skilled use of propaganda but also legislative and administrative changes, Hitler's personal charisma, economic recovery and the 'reign of terror'. The extent of which each of these methods contributed to the consolidation Nazi power differs. ...read more.

This covered every aspect of the communications media. Anyone who produced, distributed, broadcast, published or sold any kind of cinema, media, press or literature had to first join one of the departments and then follow the rules of that government department. Along with the compulsory membership, came the prohibition of all Jewish newspapers, radio and cinema. Due to the censorship of media and the control of its content the general mood of the media was made very pro-Nazi, therefore anyone who disagreed with the media's views would be stepping out of the public mood. The terror of not conforming, due to the total propaganda they were subjected to, contributed greatly to the consolidation of power in Nazi Germany. This terror was made even more potent by organised violent acts against anything considered anti or un-Nazi, such as the book burning during the spring of 1933. Propaganda was also used to show the public that Nazi Germany was a regime of modern progress and further convinced the public that it was the only solution in order to progress. ...read more.

the threat of violence for non conformists was too great not to consider it as another main reason if not an equal reason for Hitler and the Nazi party's consolidation and maintenance of power. The threat of terror worked well because though it was only implemented on a minority it affected a large majority in not speaking out over issues that did not affect them. However, although fear may have helped consolidate power, propaganda played a part here too. It was through the use of propaganda that Nazis 'justified' their violent acts, such as the Reichstag fire and the Night of the Long Knives on 30th June 1934. Instead of keeping this major incident quite, they made it open conveying the message that Rohm and the other leaders were dangerous and that the Nazis actions were for the greater good of Germany. Here, propaganda played the vital role of preventing an uprising and convincing the people that because the Nazis were open about the event it had to be for the 'good of the nation.' ...read more.