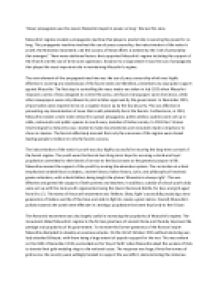 'Clever propaganda was the reason Mussolini stayed in power so long.' Discuss this view

Ã¯Â»Â¿'Clever propaganda was the reason Mussolini stayed in power so long.' Discuss this view Mussolini's regime created a propaganda machine that played a pivotal role in securing his power for so long. This propaganda machine involved the use of press censorship, the indoctrination of the nationâ€™s youth, the Romanita movement, and the success of these efforts is evident by the 'cult of personality that emerged.' There were additional factors that supported Mussolini's regime including the support of the Church and the use of terror and oppression, however to a large extent it was the use of propaganda that played the most important role in maintaining Mussolini's regime. The main element of the propaganda machine was the use of press censorship which was highly effective in covering any weaknesses of the fascist state and therefore, prevented any unpopular support against Mussolini. The first step in controlling the mass media was taken in July 1925 when Mussolini imposed a series of laws designed to control the press; anti-fascist newspapers were shut down, while other newspapers were only allowed to print articles approved by the government. In December 1925, all journalists were required to be on a register drawn up by the fascist party. ...read more.

To recreate this former greatness of the Roman Empire Mussolini attempted to develop an overseas empire. On the 3rd of October 1935 without declaring war, Italy attacked Ethiopia, with there being a large extent of popular support for the war. This was evident on the 18th of December 1935, earmarked as the 'Day of Faith' when Mussolini asked the women of Italy to donate their gold wedding rings to the national cause. The response was huge, thirty-five tonnes of gold across the country were willingly handed to support the war effort, demonstrating the immense support towards Mussolini and the RomanitÃ  movement. Addis Abba was finally captured in the 5th of May 1936. The successful invasion of Ethiopia was the highpoint of Mussoliniâ€™s career, it distracted from the failures of Mussolini's domestic policies preventing discontent. The fascists did not in fact recreate the glory of the Roman Empire, but nonetheless the RomanitÃ  movement regained the support of the Italian people and ensured the survival of the regime. The argument that propaganda was the most important factor in ensuring the long-term survival of the regime is evident by the 'Cult of Personality' that emerged around Mussolini. ...read more.

Furthermore, Mussolini position in power was further supported by the Church following the Lateran pact that was negotiated. The Lateran Pact, signed in February 1929 addressed the Roman question and restored relations between the Italian state and the Catholic Church. The support of the Church did help secure Mussolini's power but it was not the main factor in the long-term survival of the regime; Mussolini did manage to maintain power even in facing attacks from the Church; In June 1931 in his encyclical, the pope criticised the 'pagan worship of the state,' but the people continued to support the fascist government largely because the propaganda machine convinced them of the successes of the regime. In conclusion, the propaganda machine under the fascist regime was highly effective, as it covered up the weaknesses of the fascist regime and convinced the Italians only of the successes of the great nation. That is why the support of the police state or even the Church does not compare to the importance of the propaganda machine, because it instilled hope in Italians and loyalty towards Mussolini. Therefore the propaganda machine was the main reason why Mussolini stayed in power so long. 29/30 ...read more.