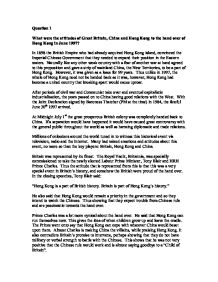 What were the attitudes of Great Britain, China and Hong Kong to the hand over of Hong Kong in June 1997?

Question 1 What were the attitudes of Great Britain, China and Hong Kong to the hand over of Hong Kong in June 1997? In 1898 the British Empire who had already acquired Hong Kong island, convinced the Imperial Chinese Government that they needed to expand their position in the Eastern waters. Naturally like any other weak country with a fear of another war at hand agreed to this proposition and gave a strip of mainland China, the New Territories, to be a part of Hong Kong. However, it was given as a lease for 99 years. Thus unlike in 1997, the whole of Hong Kong need not be handed back as it was, however, Hong Kong had become a united country that breaking apart would cause uproar. After periods of civil war and Communist take over and eventual capitalistic industrialisation, the years passed on to China having good relations with the West. With the Joint Declaration signed by Baroness Thatcher (PM at the time) in 1984, the fateful June 30th 1997 arrived. At Midnight July 1st the great prosperous British colony was completely handed back to China. If a separation would have happened it would have caused great controversy with the general public throughout the world as well as harming diplomatic and trade relations. ...read more.

This in the Chinese Tradition means he would return. Thus echoing Britain's promise to Hong Kong. Hours after the hand over, a moderated chat was held on the Time Magazine Website, between a new Provisional Hong Kong Legislator, Tsang Yok Sing (Set-up by the Chine Government) and an ex-Legislator Emily Lau (elected by the people in Hong Kong). Lau would strongly disagree to Charles's patronising remark that Hong Kong can look after themselves now as Hong Kong never had the chance to be independent. The Legislative Council set up by the British was partly democratic, as only 18 out of 60 seats were up for election. Ms Lau says: "It is Britain's disgrace in 156 years of colonial rule, HK has never had democracy. It is like pregnancy, either you are (democratic) or you are not." Thus Chinese rule would not be as different as British rule, the new Provisional Council, however, had no elected seats. Thus a bitter sweet attitude emerges from this, she was glad that Britain had gone, but was not very happy with the new Chinese Government either. It was as though nothing had changed. Also echoes of Tiananmen Square still run through the hearts of Hong Kong's citizens and there are fears that demonstrations would result in the same way of June 1989: "Later there will be probably be oppression" (SCMP HK Website - Word on the Street) ...read more.

The Chinese appointed General had been ordered to love the people. This shows that China want to make the system work into one united country. On the night, the Democratics were allowed to make speeches. This is a sign that China want to avert another Tiananmen Square. Overall China are acting to be very diplomatic with Hong Kong and are very positive towards the hand over. With the complete "package" given to China, the Chinese would have more trade agreements with the West and Hong Kong. Due to this they would expand their technological power, and gain more suitable land to start capitalistic businesses. For China the hand over is profitable enough economically to appease the people of Hong Kong politically. Consequently with the hand over, China will grow richer and more capitalistic that could be the intention of Britain of giving all of Hong Kong back, to start the domino effect of democracy through increasing capitalism. Thus in 50 years the world could wake up to a democratic China, whose policies would not cause uproar in Hong Kong. The last influential communist country would fall and Britain would have been part of that success. On the other hand, in 50 years, China may step up their communist policies and another Cultural Revolution would devastate Hong Kong. If this would happen, Britain would be cursed by the people of Hong Kong island. ...read more.