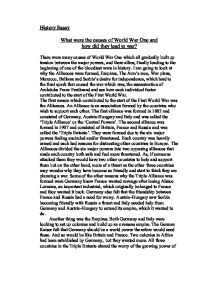 What Were the Cause of World War One?

And so would be like Britain and France. Two colonies in Africa had been established by Germany, but they wanted more. All three countries in the Triple Entente shared the worry of the growing power of Germany and the Kaiser's desire for a large empire. Therefore more tension, awareness and fear were built. There was also 'The Arms Race'. It developed after 1900 and was one of the most significant causes of tension in Europe which lead to the First World War. The main naval rivalry was built up between Britain and Germany. It originally started when Britain's navy was the most powerful in the world. Then when Kaiser Wilhelm announced his intentions were to build a powerful German navy, this made Britain feel threatened. It also made Britain suspicious of why Germany needed a large navy, as the reasoning for the British navy was it was spread out protecting all our colonies. Whereas Germany didn't have much of an empire to defend. Germany reacted to Britain's concerns by thinking the British were over reacting. ...read more.

By this time everyone thought that war was unavoidable and was 'bound to come' sooner or later; which made war a little more likely each time this remark was made. The countries were so sure war would come as they began to make very detailed plans for what to do if and when it did happen. Then it was finally started after the assassination of the Archduke Franz Ferdinand. Even if the Archduke hadn't been shot I still think all the tension would have resulted in war as many countries wanted revenge or weren't willing to forgive one another. The fact that everyone was talking about war and war plans it resulted in war just seeming inevitable. I think the tension the naval race caused was mainly Germany's fault as they didn't have a large empire to guard and/or protect so why have a big navy, unless you were preparing for war, this just resulted in the other major powers becoming suspicious and Britain also building more ships. As Kaiser Wilhelm himself announced 'his intention to build a powerful German navy' at which time tensions were already beginning to rise, this and many other causes that could have been sorted out without war weren't, so also didn't help. ...read more.