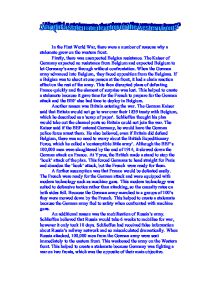 why a stalemate grew on the western front

In the First World War, there were a number of reasons why a stalemate grew on the western front. Firstly, there was unexpected Belgian resistance. The Kaiser of Germany expected no resistance from Belgium and expected Belgium to let Germany's army through without confrontation. When the German army advanced into Belgium, they faced opposition from the Belgians. If a Belgian was to shoot at one person at the front, it had a chain reaction effect on the rest of the army. This then disrupted plans of defeating France quickly and the element of surprise was lost. This helped to create a stalemate because it gave time for the French to prepare for the German attack and the BEF also had time to deploy in Belgium. ...read more.

At Ypres, the British made a stand to stop the 'hook' attack of the plan. This forced Germans to head straight for Paris and abandon the 'hook' attack, but the French were ready for them. A further assumption was that France would be defeated easily. The French were ready for the German attack and were equipped with modern technology such as machine guns. This modern technology was suited to defensive tactics rather than attacking, so the casualty rates on both sides fell. Because the German army marched in a groups of 100's they were mowed down by the French. This helped to create a stalemate because the German army fled to safety when confronted with machine guns. ...read more.

When Von Kluck realised that the Schlieffen plan would not work, he ordered the army to head straight for Paris and abandon the hook strategy. The German army met French defences at Marne. This was where stalemate occurred. Trenches were first dug at Aisne to protect themselves and also to hold onto enemy land that had been invaded. Both sides dug trenches and expanded them. In my opinion the main reason for stalemate is the extra resistance from Belgium and the BEF. I think this because if Belgium had not resisted then the German army would have advanced into France and invaded Paris. France would not have been ready for the German army and would have been easily slaughtered. Also, the BEF would not have joined the opposition and slowed down the attack on France. ...read more.