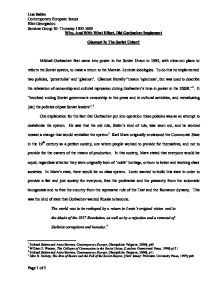 Why, And With What Effect, Did Gorbachev Implement Glasnost In The Soviet Union?

Why, And With What Effect, Did Gorbachev Implement Glasnost In The Soviet Union? Mikhail Gorbachev first came into power in the Soviet Union in 1985, with clear-cut plans to reform the Soviet system, to make a return to the Marxist- Leninist ideologies. To do this he implemented two policies, 'perestroika' and 'glasnost'. Glasnost literally "means 'openness', but was used to describe the relaxation of censorship and cultural repression during Gorbachev's time in power in the USSR."1. It "involved ending Soviet government censorship in the press and in cultural activities, and reevaluating [sic] the policies of past Soviet leaders".2 One explanation for the fact that Gorbachev put into operation these policies was as an attempt to destalinize the system. He saw that the old rule, Stalin's kind of rule, was worn out, and he worked toward a change that would revitalize the system.3 Karl Marx originally envisioned the Communist State in the 19th century as a perfect society, one where people worked to provide for themselves, and not to provide for the owners of the means of production. ...read more.

This was firstly embarrassing for the USSR when you consider that in the height of the Cold War, the Soviets were one of the two most technologically advanced communities in the world, and were the first country to launch a man made satellite, Sputnik, into space, and secondly, it highlighted the economic problems they were facing, no longer being able to compete effectively with the rest of the world. He needed to overcome the growth model put into play in the 1920s by Stalin, which focused on heavy industry, and replace it with a system that used modern technology and high productivity8. He understood that in order to achieve this, he would, however, have to give greater freedom to the peripheral states and remove the power of the Command Economy, in which governmental planning agencies have complete control of the economy of the Soviet Union. Glasnost had many effects upon implementation, the main and most prominent one being its aiding in the collapse of communism in the Soviet Union. ...read more.

This heightened sense of nationalism served only to fill people with a sense of longing for their own nation states. The citizens of the USSR no longer wanted to be referred to as such, and wanted to claim back independence for their individual countries beginning with East Germany in November 1989, the Baltic Republics in 1990 and finally the declaration of the beginning of the Commonwealth of Independent States and the collapse of the USSR in December 1991. In conclusion, Glasnost was originally implemented by Gorbachev as a means of revitalising Socialism within the Soviet Union and re-establishing it in the rest of the world as an ideology to contend with. However, the results were very different to those expected, in that the implementation of such a policy in a system like the Soviet Union, it caused the empire to topple. The main reasons for this were that people were given the freedom to opt out of the system at the same time that it highlighted ethnic tensions and revived a sense of nationalism. ...read more.