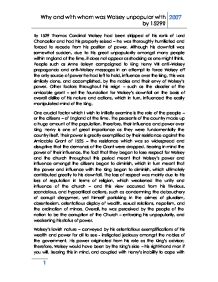 Why and with whom was Wolsey unpopular with by 1529?

By 1529 Thomas Cardinal Wolsey had been stripped of his rank of Lord Chancellor and had his property seized - he was thoroughly humiliated and forced to recede from his position of power. Although his downfall was somewhat sudden, due to his great unpopularity amongst many people within England at the time, it does not appear as shocking as one might think. People such as Anne Boleyn campaigned to King Henry VIII anti-Wolsey propaganda and anti-Wolsey messages in an attempt to force Wolsey off the only source of power he had left to hold, influence over the king. This was similarly done, and accomplished, by the nobles and their envy of Wolsey's power. Other factors throughout his reign - such as the disaster of the amicable grant - set the foundation for Wolsey's downfall on the basis of overall dislike of his nature and actions, which in turn, influenced the easily manipulated mind of the King. One crucial factor which I wish to initially examine is the role of the people - or the citizens - of England at the time. The peasants of the country made up a huge amount of the population, therefore, their influence and power over King Henry is one of great importance as they were fundamentally the country itself. ...read more.

This retaliation upon the nobles angered them greatly and further increased his unpopularity. Moreover, by Wolsey helping the peasants, as he did greatly in the justice system by opening the Court of Requests, and the Court of Star Chamber and Chancery, the nobles were set out lose quite a lot - this view is shown by Wolsey's particular pleasure in cases that had a "David and Goliath" aspect, in which Wolsey used the courts as a weapon to help the peasants (David) to beat the over mighty nobles (Goliath). Due to the fact that Wolsey inevitably had the last word, the nobles could do nothing but wait for biased judgement to be dispensed. Further cases, such as the Eltham Ordinances of January 1526 in which the powerful nobles of the members of the Privy Council were reduced from 12 to 6, just enforced Wolsey's unpopularity by his intervention in the nobility's power and the excessive, merciless punishment he continually dispensed upon those who had been prejudiced towards him. As a large number of the nobility thoroughly disliked Wolsey, it is by no means surprising that a faction occurred in court where the nobles - or most of them - opposed Wolsey and continuously attempted to belittle and degrade him. They obtained this opportunity by the presence of Anne Boleyn. ...read more.

This view immediately convinced Henry of Wolsey's treachery and immediately made him unpopular with the last source of his power. With this gone, Wolsey was stripped of his power, status, and property. The nobles and Boleyn had achieved their goal in driving Wolsey out of power. There is still evidence however, that Henry did not completely lose popularity and fondness of Wolsey even after the stripping of his title shown through the amount of letter he sent to Wolsey. This is proof that Wolsey's downfall was only due to the actions of Boleyn, the nobles, and Henry's weak mind. One could even go as far as to say that if the annulment matter had been sorted faster, then Wolsey would be popular with at least Boleyn and therefore stayed in power - this is however, a possibility, but it is true to state that Wolsey's unpopularity resided with people of very high status'; some of these could have been avoided, such as the nobles. Therefore, Wolsey's actions throughout his reign were the only reason for his unpopularity - which implies that Wolsey's downfall was inevitable if his reign was accompanied by his nature. ?? ?? ?? ?? Why and with whom was Wolsey unpopular with by 1529? 2007 1 ...read more.