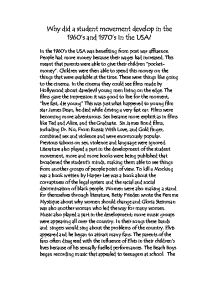 Why did a student movement develop in the 1960's and 1970's In the USA? In the 1960's the USA was benefiting from post war affluence. People had more money because their wages had increased. This meant that parents were able to give their children "pocket-money". Children were then able to spend this money on the things that were available at the time. These were things like going to the cinema. In the cinema they could see films made by Hollywood about daredevil young men living on the edge. The films gave the impression it was good to live for the moment, "live fast, die young" This was just what happened to young film star James Dean, he died while driving a very fast car. Films were becoming more adventurous. Sex became more explicit as in films like Ted and Alice, and the Graduate. Six James Bond films, including Dr. No, From Russia With Love, and Gold finger, combined sex and violence and were enormously popular. Previous taboos on sex, violence and language were ignored. Literature also played a part in the development of the student movement, more and more books were being published that broadened the student's minds, making them able to see things from another groups of people point of view. ...read more.

In his songs he would sing about subjects like, nuclear war, racism and the waging of war. The 1960's was also a decade of social unrest, many people were not happy. Many people were campaigning for civil rights and many people were also protesting against government policies. Many students were affected by the campaigning and so many of them joined in with the campaigns. This began to start a lot of political activity within the country's colleges and universities. Students began to join groups; they were able to do this because they had more freedom, for example, in 1967 the oral contraceptive pill became legal, this gave women to option on when they wanted to have children. The students knew that they were going to be the next generation of the country and they wanted to change the way that things were at the time. It was no surprise that by the mid 1960's a lot of the students were heavily involved in the protests. The American president John F. Kennedy was seen by many as an object of optimism, with who they could look forward to what their country was going to become. ...read more.

There were also some troops at the march, who told the students what they had done in Vietnam. The troops were disgusted by their actions and blamed the government. Many of them threw their medals they had received back to the government. Another group of people were also present in the 1960's and 1970's; these were the so-called "hippies". They were also part of the group that marched to Washington DC. The hippies were for peace and against war. The Hippie movement endorsed drugs, rock music, mystic religions and sexual freedom. They opposed violence. . The Woodstock Festival, at which 400,000 young people gathered in a spirit of love and sharing, represents the pinnacle of the hippie movement. Many hippies moved to Haight, Ashbury, in San Francisco, East Village in New York City, or lived in communes. The 1964 Civil Rights Act was amended to include discrimination against gender, because women who even if they were as qualified as a man would only get half of the pay he would receive. In1967 abortion and artificial insemination became legal in most states. This gave the female students the choice of when they wanted to have children and so they did not have to leave school if they accidentally became pregnant. Lucy Wade 10RH ...read more.