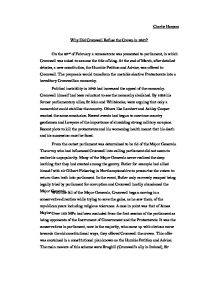 Why Did Cromwell Refuse the Crown in 1657?

Charlie Hanson Why Did Cromwell Refuse the Crown in 1657? On the 23rd of February a remonstrate was presented to parliament, in which Cromwell was asked to assume the title of king. At the end of March, after detailed debates, a new constitution, the Humble Petition and Advice, was offered to Cromwell. The proposals would transform the unstable elective Protectorate into a hereditary Cromwellian monarchy. Political instability in 1649 had increased the appeal of the monarchy. Cromwell himself had been reluctant to see the monarchy abolished. By 1652 his former parliamentary allies, St John and Whitelocke, were arguing that only a monarchist could stabilise the country. Others like Lambert and Ashley Cooper reached the same conclusion. Recent events had begun to convince country gentlemen and Lawyers of the importance of shredding strong military carapace. ...read more.

A case in point was that of James Naylor. Over 100 MPs had been excluded from the first session of the parliament as being opponents of the Instrument of Government and the Protectorate. It was the conservatives in parliament, now in the majority, who came up with obvious move towards the old constitutional ways, they offered Cromwell the crown. This offer was contained in a constitutional plan known as the Humble Petition and Advice. The main movers of this scheme were Broghill (Cromwell's ally in Ireland), Sir Richard Onslow (a Surry MP). Cromwell was after some thought to refuse this offer of the crown. Cromwell seemed to waver. One side of his nature had always wanted the old constitution with safe guards and reforms and, if the evidence of Bulstrode Whitelocke, a man of changing principles, is to be relied on, Cromwell ...read more.

Cromwell seems to have decided that kingship was a form of government, which God, by granting him all his victories, had 'Witnessed against'. It was a corrupt form of government 'I would not build Jericho again' he said. Cromwell also feared that by taking the Crown he would be pushed in too conservative a direction and therefore departs from his radical religious views. Cromwell also saw that accepting would be a sign of personal ambition and glorification, Cromwell did not want to be viewed as using this opportunity to his own benefit. Cromwell therefore refused the Crown. When Cromwell refused the Crown, the Humble Petition and Advice was revised and the right of the Protector to name his successor was submitted. Cromwell accepted the revised scheme in March 1657, although the Humble Petition was not popular with some elements in the army. ...read more.