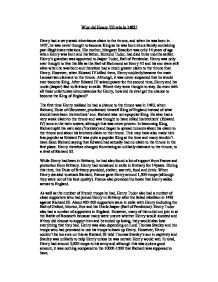 Why did Henry VII win in 1485? Henry had a very weak inheritance claim to the throne, and when he was born in 1457, he was never thought to become King as he was born into a family containing past illegitimate relations. His mother, Margaret Beaufort was only 14 years of age when Henry was born and his father, Edmund Tudor, had died three months earlier. Henry's guardian was appointed to Jasper Tudor, Earl of Pembroke. Henry was only ever thought to live his life as the Earl of Richmond as Henry VI and his son were still alive when he was born and therefore had a much greater claim to the throne than Henry. However, when Edward IV killed them, Henry suddenly became the main Lancastrian claimant to the throne. Although, it was never suspected that he would ever become King. After Edward IV seized power for the second time, Henry and his uncle (Jasper) ...read more.

About 400-500 supporters were in exile with Henry including the Earl of Oxford, Morton, Fox and his Uncle Jasper (Earl of Pembroke). Henry Tudor also had a number of supporters in England. However, many of them did not join in at the Battle of Bosworth because many were unsure whether Henry would succeed and if they did choose to support him and he ended up losing, they would also lose everything that they had. Henry was also depending on Lord Thomas Stanley and his troops who had promised to use his troops to back up Henry. However, Henry couldn't be too sure on this as Richard III held Thomas Stanley's son in captivity and Stanley was unlikely to help Henry unless he was certain Henry would win. In total, Henry had around 5,000 troops in his army and although this was quite a good amount, it was nothing compared to the 10000-1500 that Richard was supposed to have. ...read more.

Richard was killed during the battle mainly because of his lack of troops, his mistake in charging at Henry personally and the fact that Thomas Stanley's troops helped Henry at the end and attacked from behind. Although all these reasons gave Henry all the chances at becoming King, I personally think that Henry would not have had a chance at becoming King if it wasn't for the incident in 1483. If Richard had not taken the throne from his nephew, Henry would have had almost no chance in becoming King. This is also the same with Richard's unpopularity. If Richard had been a popular King and hadn't started the rumours or had the wrong favourites, it is likely that Richard would have at the time had a strong army behind him at the battle therefore giving Henry no chance to the throne. But, all the circumstances since 1483, helped Henry to winning the throne at the Battle of Bosworth and therefore legibly becoming King Henry VII. ...read more.