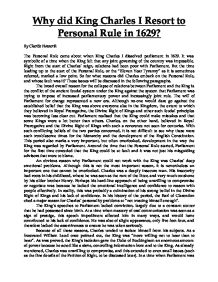 Why did King Charles I Resort to Personal Rule in 1629?

Why did King Charles I Resort to Personal Rule in 1629? By Charlie Howarth The Personal Rule came about when King Charles I dissolved parliament in 1629. It was symbolic of a time when the King felt that any joint governing of the country was impossible. Right from the start of Charles' reign, relations had been poor with Parliament. But the time leading up to the start of the Personal Rule, or the "Eleven Year Tyranny" as it is sometimes referred, marked a low point. So for what reasons did Charles embark on the Personal Rule, and whose fault was it? These issues will be discussed in the following paragraphs. The broad overall reason for the collapse of relations between Parliament and the King is the conflict of the ancient feudal system under the King against the system that Parliament was trying to impose of increased parliamentary power and increasingly joint rule. The will of Parliament for change represented a new era. Although no-one would dare go against the established belief that the King was above everyone else in the Kingdom, the extent to which they believed in Royal Prerogative, the Divine Right of Kings and other such feudal principles was becoming less clear cut. Parliament realised that the King could make mistakes and that some Kings were a lot better than others. Charles, on the other hand, believed in Royal Prerogative and the Divine Right of Kings with such a reverence not seen for centuries. With such conflicting beliefs of the two parties concerned, it is not difficult to see why these were such troublesome times for the Monarchy and the development of the English Constitution. This period also marks a very important, but often overlooked, development in the way the King was regarded by Parliament. Around the time that the Personal Rule started, Parliament for the first time conceded that the King could be at fault and it was not just his misguiding advisors that were to blame. ...read more.

Bristol had damaging information relating to bribes given to the Spanish by Buckingham to woo a Spanish princess away to marry Charles in 1623. To keep them quiet, Charles imprisoned them for treason. However, he was forced to let them go because of a large Lords revolt. Parliament then tried to impeach Buckingham, but Charles was prepared to move and take the onslaught himself in defence of his friend. He dissolved the Parliament. These examples show how Charles was prepared to defend his friend when it would have been wiser to sacrifice him. Of course, the dissolution of Parliament because of Buckingham did much to freeze relations and were still not forgotten when the next Parliament was called in 1628. During that time, handbills were drawn up that summarised the hatred of Buckingham: "Who rules the Kingdom? The King. Who rules the King? The Duke. Who rules the Duke? The Devil". Buckingham was assassinated in 1628, and Parliament hoped that relations with the King would greatly improve afterwards. However, they did not. This was because, previously, Buckingham had been a "cushion" that absorbed the attacks that Parliament made on the King. But with Buckingham out the way, the attacks became increasingly centred on the King because Parliament had run out of people to blame other then the King. Throughout Charles' reign of the 1620s, England was at war. First with Spain, and then with France and Spain. This was due to a disastrous foreign policy, largely orchestrated by Buckingham (perhaps the most important reason why he was so hated up to his death). Neither war was for a reason of any relevance to the English people or the security of the state (even though they could be blamed on relevant reasons). War in the seventeenth century was, thanks to the invention of gunpowder, becoming very expensive. The cash-strapped King needed money to pay for these wars which he didn't have. ...read more.

The King had had about enough of Parliament's stringent control of subsidies, and Parliament were equally angry about the King's lack of compromise, of acting without Parliament. The final blow came when Parliament introduced the "Three Resolutions" of 1629. As it was being made, Charles had already ordered an adjournment of Parliament, but the Commons continued with it, seeing it as the crunch point; the point where either the King will embark on a tyrannous personal rule (as he did), or where Parliament can finally leash him. The Resolutions were solely aimed at the two issues that were of most concern to Parliament in 1629: the crushing of Arminianism and the stopping of the King collecting Tonnage and Poundage. The orchestrator of this, Sir John Eliot was imprisoned after the King heard of it, and Parliament was dissolved on 10 March 1629. And thus, Charles embarked on the Eleven Year Tyranny, or the Personal Rule. The Personal Rule was representative of Charles' belief in the Divine Right of Kings and Royal Prerogative. He believed Parliament were a hindrance, holding him back. The reasons why he reached this conclusion are many and complicated. The Divine Right of Kings and, strongly linked, Charles' belief in feudalism, were perhaps umbrella terms that accounted for all of the actions that made Parliament believe that it could not work with him at all. Parliament could have been a lot more generous with granting the King subsides, but perhaps it had good reason to. Again, the Divine Right of Kings was a strong reason why so little money was granted: Parliament needed to leash the King. The King failed to concede that the feudal system was becoming obsolete in a time when England was trying to lay the foundations of a more democratic system and technology was advancing quickly (it would be less than 150 years until the start of the Industrial Revolution). The influence of Buckingham can not be forgotten. He was responsible for a weakening of England's military power and reputation with it, as well as the cause of financial disagreements with the King and Parliament. ...read more.