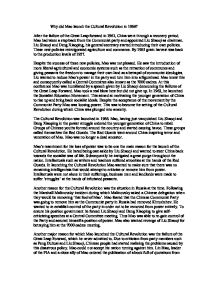 Why did Mao launch the Cultural Revolution in 1966?

Why did Mao launch the Cultural Revolution in 1966? After the failure of the Great Leap forward in 1961, China went through a recovery period. Mao had taken a step back from the Communist party and appointed Liu Shaoqi as chairman. Liu Shaoqi and Deng Xiaoping, his general secretary started introducing their own policies. These new policies reinvigorated agriculture and commerce. By 1965 grain harvest was back to the production levels of 1957. Despite the success of these new policies, Mao was not pleased. He saw the introduction of more liberal agricultural and economic systems such as the retraction of communes and giving peasants the freedom to manage their own land as a betrayal of communist ideologies. Liu wanted to reduce Mao's power in the party and turn him into a figurehead. Mao knew this and consequently called a Central Committee also known as the 7000 cadres. At this conference Mao was humiliated by a speech given by Liu Shaoqi denouncing the failures of the Great Leap Forward. ...read more.

In launching the Cultural Revolution Mao wanted to make sure that there was no remaining intelligentsia that would attempt to criticize or remove him from power. Intellectuals were not alone in their sufferings, business men and landlords were made to suffer 'struggles' at the hands of infuriated peasants. Another reason for the Cultural Revolution was the situation in Russia at the time. Following the Marshall Malinovsky incident during which Malinovsky asked a Chinese delegation when they would be removing 'that fool of Mao'. Mao feared that the Chinese Communist Party was going to remove him as the Communist party in Russia had removed Khrushchev. He wanted to re-establish control of the party in order not to be removed from power entirely. To ensure his position government he forced Liu Shaoqi and Deng Xiaoping to give self-criticizing speeches at a Central Committee meeting. Thus Mao was able to re-gain control of the Party and assured himself a position of power. Mao also wanted revenge of Liu Shaoqi for betraying him at the 7000 cadres meeting. ...read more.

Industrial production fell drastically by 14 percent in 1967. The lack of intellectuals caused Mao's secrete nuclear plans to suffer. China's relationship with Russia was at an all time low under Brezhnev. The experts sent to aid China were called back which caused a worrying shortage of scientific knowledge. In addition to this, the arts had greatly suffered. Many artists had been repressed during the Cultural Revolution. Play writer Wu Ran had been heavily criticized for writing a play that was deemed as anti-socialist. Education also greatly suffered Mao previous efforts at making China an educated nation had been destroyed as schools and universities were closed for revolutionary struggle. In addition to all of this, approximately half a million people are believed to have perished in this period of extreme violence. The reasons behind the Cultural Revolution are much debated. Little is known about why Mao launched it, I have come to the conclusion the Mao wanted to take control of China and was tired of not being involved in politics. However some may argue that the Cultural Revolution was a purely existential act, merely a spontaneous period of brutality and rage with no motives behind it. ...read more.