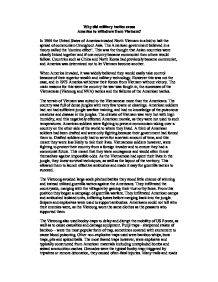 Why did military tactics cause USA to withdraw from Vietnam?

Why did military tactics cause America to withdraw from Vietnam? In 1964 the United States of America invaded North Vietnam in a bid to halt the spread of communism throughout Asia. The American government believed in a theory called the 'domino effect'. This was the thought that Asian countries were closely linked together and if one country became communist then others would follow. Countries such as China and North Korea had previously became communist, and America was determined not to let Vietnam become another. When America invaded, it was widely believed they would easily take control because of their superior wealth and military technology. However this was not the case, and in 1973 America withdrew their forces from Vietnam without victory. The main reasons for this were the country the war was fought in, the successes of the Vietnamese (Vietcong and NVA) tactics and the failures of the American tactics. The terrain of Vietnam was suited to the Vietnamese more than the Americans. The country was full of dense jungles with very few towns or clearings. American soldiers had not had sufficient jungle warfare training, and had no knowledge of the poisonous creatures and disease in the jungles. ...read more.

A dense jungle canopy hid the Trail, making enemy bombing difficult. The Vietcong used a vast system of hidden tunnels that covered the majority of the country. These provided an area of safety for soldiers away from enemy spy planes and bombing. The tunnels facilitated guerrilla tactics as men could launch attacks from them, before disappearing back into them. All tunnels were heavily camouflaged often almost invisible from above ground. Foliage and trees concealed entrances and exits, while even within the tunnels certain corridors are hidden. Tunnels were never alike, though the more extensive systems contained ammunition caches, dormitories, conference rooms, kitchens and even hospitals. The United States of America used very different tactics to the Vietnamese. The wars they had fought in the past were large-scale conflicts with immense pitched battles. American military tactics typically revolved around large infantry advances supported by armoured detachments. Vietnam was a new experience for them. America began the war in Vietnam with 'Operation Rolling Thunder', a bombing campaign. It was supposed to last eight weeks but it continued for three years. The aim of this bombing campaign was to cripple the North Vietnamese infrastructure and destroy their military installations. It was believed that if heavy damage were inflicted upon the Vietnamese, they would surrender. ...read more.

If any were found then the Americans would burn down the village and take prisoners. Search and destroy operations were not always successful as guerrillas began setting ambushes for the Americans. As the enemy blended in with the civilians, the Americans could rarely distinguish between them. This caused deep frustration for the Americans who were losing their friends to invisible enemies. This resulted in them occasionally taking their anger out on villages. An example of this is the 'My Lai' incident, where over three hundred unarmed civilians were killed. Overall, I feel the successes of the Vietnamese tactics far outweigh the successes of the American tactics. However, despite the Vietcong taking full advantage of the terrain America caused much higher losses than they did. America was forced to withdraw as the war had very little support at home and there were many protests. As their tactics alienated the Vietnamese people, many Americans believed the war was wrong. The public had begun to hear of the atrocities committed by their soldiers. The drug abuse and exceptionally poor morale was also discovered, making public opinion on the war reach an all time low. The Tet Offensive of 1967 was the turning point, as it convinced the American government that the Vietcong had inexhaustible amounts of men willing to give their lives to fight off the invaders. This caused the Americans to withdraw without victory. ...read more.