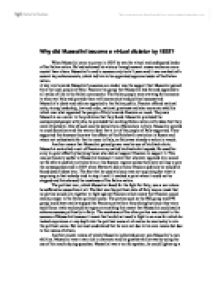 Why Did Mussolini Become a Virtual Dictator By 1925?

Why did Mussolini become a virtual dictator by 1925? When Mussolini came to power in 1925 he was the virtual and undisputed leader of the Italian nation. He had achieved his victory through several means and some more crucial than others. Mussolini's road to success only took 5 years and it was marked with several key achievements, which led him to be appointed supreme leader of the Italian nation. A key role towards Mussolini's success as a leader was the support that Mussolini gained from the local people of Italy. Fascism the group that Mussolini had formed appealed to all walks of like in the Italian community. The Italian people were starving for someone to take over Italy and provide them with economical and political success and Mussolini's ideals and reforms appealed to the Italian public. Fascism offered national unity, strong leadership, law and order, national greatness and also economic stability which was what appealed the people of Italy towards Fascism so much. ...read more.

The fact that he used violence was not surprising but what is surprising is that nobody tried to stop it until it reached a point when it could not be stopped and this showed the weakness of the Italian nation. The political war, which Mussolini faced for the fight for Italy, was a war where he suffered no casualties at all. The fact was the political state of Italy was so weak that no parties would join together to fight against Fascism which meant that Fascism could easily prosper in the Italian political scene. The parties such as the PSI group and PPI group could have easily stopped the Fascism party from flourishing but since they were such fierce rivals and could not agree on anything this meant that Mussolini could easily achieve success politically in Italy. The weakness of the other parties was crucial to the success of Mussolini because it meant that he did not need to fight in an area for which he lacked experience or any depth into the political scene at all and so he was lucky to win the political scene. ...read more.

Mussolini was a very lucky man in some aspects although he did achieve power legitimately he was helped during his road to success by luck. If he was not lucky then why were all the political parties so weak, if he was not lucky why did socialism crush Fascism before it became powerful, if Mussolini was not lucky then why did Fascism succeed so well. Although the argument is not sensible it is an argument that can be debated and if it were to be argued if Mussolini was a lucky man or not, the outcome would undoubtedly be yes. Overall Mussolini achieved power of Italy due to several different reasons each different from the next. Mussolini was an admirable leader and although it can be argued that he was unfavorable during his reign as virtual dictator of Italy, his road to success was marked with achievements and features that would be unrecognizable in a man such as himself. He became leader due to his own means and he only helped himself in becoming ultimate leader of the Italian nation. ...read more.