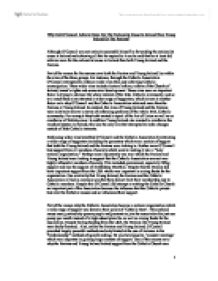 Why Did OConnell Achieve More For The Nationalist Cause In Ireland Than Young Ireland Or The Fenians?

Why Did O'Connell Achieve More For The Nationalist Cause In Ireland Than Young Ireland Or The Fenians? Although O'Connell was not entirely successful himself in forwarding the nationalist cause in Ireland and achieving all that he aspired to it can be said that he at least did achieve more for the nationalist cause in Ireland than both Young Ireland and the Fenians. Part of the reason for his success over both the Fenians and Young Ireland lies within the aims of the three groups. For instance, through the Catholic Association O'Connell attempted to embrace wider aims than just achieving Catholic emancipation. These wider aims include electoral reform, reform of the Church of Ireland, tenant's rights and economical development. These aims were an important factor in trying to advance the whole interest of the Irish, Catholic community, and so as a result these aims attracted a wider range of supporters, which in turn is another factor as to why O'Connell and the Catholic Association achieved more than the Fenians or Young Ireland. In contrast, the aims of Young Ireland and the Fenians were relatively narrow in terms of embracing problems of the whole Irish, Catholic community. For example they both wanted a repeal of the Act of Union as well as an overthrow of British power. In addition Young Ireland also wanted to overthrow the Landlord system in Ireland; this was the only aim that attempted to make changes outside of Irish Catholic interests. ...read more.

By 1834 the Whig government were especially reliant on Irish support in order for them to continue in office. The same cannot be said for either Young Ireland or the Fenians. The strong government response to their actions was partly to blame for their failure to achieve much for the nationalist cause in Ireland. This can be seen by in 1865 the British government arrested many leading Fenians and suppressed their newspaper, The Irish People as a result of a plot by the Irish Republic Brotherhood (IRB) and the USA to overthrow British power and create a republic. Further more three Fenians were also executed for the murder of a policeman. Therefore the strong response to the Fenians and Young Ireland by the British government meant that there were few successes to the nationalist cause as a result of their organisations being more tightly suppressed than the Catholic Association was. Therefore, in conclusion it can be seen that the reasons as to why O'Connell achieved more for the nationalist cause in Ireland were a combination of the association's aims, methods particularly the non- violent ones and the important support that it gained as a result of it. The lack of success of the Fenians and Young Ireland compared to that of O'Connell's catholic Association were also down to the context of time and the strength and response of the British government to the organisations. ?? ?? ?? ?? 1 ...read more.