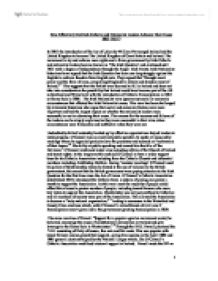 How Effectively Did Irish Catholic and Nationalist Leaders Advance Their Cause 1801-1921 ?

How Effectively Did Irish Catholic and Nationalist Leaders Advance Their Cause 1801-1921 ? In 1801 the introduction of the Act of Union by William Pitt merged Ireland and the United Kingdom to become The United Kingdom of Great Britain and Ireland. The movement to try and achieve more rights and a fairer government by Irish Catholic and nationalist leaders became known as 'The Irish Question' and continued until 1921 with a degree of independence through the Anglo- Irish Treaty. Irish Nationalist historians have argued that the Irish Question has been one long struggle against the English to achieve freedom from English rule. They argued that "through moral power and the force of arms, compelling [England] to retreat and abandon most of Ireland." 1 This suggests that the British were doomed to fail in Ireland and does not take into consideration the possibility that Ireland could have become part of the UK as Scotland and Wales have with the introduction of Catholic Emancipation in 1801 or Home Rule in 1886. The Irish Nationalist view ignores any social or economic circumstances that affected the Irish Nationalist cause. This view has been challenged by revisionist historians who argue that social and economic factors were more important and had the largest impact on whether the nationalist leaders were successful or not in advancing their cause. The reasons for the success and failures of the leaders can be simply explained as they were successful in their aims when circumstances were favourable and ineffective when they were not. Undoubtedly skilled leadership backed up by effective organisations helped leaders to make progress. O'Connell was an excellent public speaker; he spoke at mass public meetings where he appealed particularly to the peasantry and seemed an "incarnation of their hopes."2 His ability at public speaking and earned him the title of 'the Deliverer,' O'Connell embraced wider aims including reform of the Church of Ireland and tenant rights. ...read more.

They became more widespread in their attacks and started to target members of the public who were accused of "giving comfort to the enemy,"12 as well as the police and soldiers greatly weakening British rule in Ireland. In 1919 Sinn Fein under the leadership of de Valera set up their own parliament - the Dail Eireann which tried to gain further advancement of their cause by issuing a "Declaration of Independence."13 De Valera was able to combine his power over both the political and militant wings of Sinn Fein. Furthermore De Valera showed unwillingness to compromise as he didn't join the Irish Convention of 1917, unlike Redmond, and refused the 1920 Government of Ireland Act. Such leadership and organisation helped Sinn Fein reach the position were they could force the British government to agree to a degree of separation under the Anglo- Irish Treaty of 1921 The British political situation was also a factor, a weak and divided Tory government passed Emancipation in 1828 rather than risking Civil War. O'Connell benefited as a result of the weakness of Wellington's government which ended in 1830. The Whigs coming to power in the 1830s allowed O'Connell to "use his commanding position as leader of a small but significant third party to play off the Whigs against Conservatives and thus extract reform for Ireland." 14 Parnell benefited from the situation in 1885 as he held the balance of power within Parliament and Gladstone was sympathetic to the home Rule idea. The Liberals were reliant upon the support of the Irish Party and so were supportive of the Irish cause. In addition the December 1910 general election helped Redmond as the support for the IPP was important in allowing Asquith to continue as Prime Minister. ...read more.

World War One did little to advance the Irish nationalist cause partly because the Irish question was no longer a priority for the British government and although the July 1917 Irish Convention was held to secure an Irish settlement Lloyd George's "real intention was to keep the Irishmen talking while he got on with the task of winning the war." 29 Furthermore "as the war dragged on the prospect of any rapid change [for Ireland] became increasingly remote."30 Therefore partly as a result of this the Irish nationalist leaders did little to advance their cause during the war years and indeed hindered any success since only after the war had ended did the Irish question begin to appear on the government's agenda. Therefore at certain times the Irish Catholic and Nationalist leaders did advance their cause as can be seen by the achievements they gained, such as the Anglo- Irish Treaty in 1921 and with it the creation of an Irish Republic. However at certain times the leaders were less successful in advancing their cause such as Young Ireland. The factors enabling the nationalist leaders to advance their cause were a mixture of social, economic and political circumstances along with the leadership and organisational qualities of the various leaders and organisations as revisionist historians have argued rather than the idea of a constant struggle against the British to achieve an Irish Republic expressed by Irish Nationalist historians. Irish nationalist leaders were only able to advance their cause when all the circumstances were right between 1801-1921. Sinn Fein was able to effectively advance their cause further than previous leaders had been was due to them having the perfect mix of the right circumstances and leadership which was not always true of other leaders. ...read more.