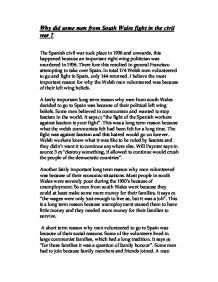 Why did some men from South Walesfight in the civil war ?

Why did some men from South Wales fight in the civil war ? The Spanish civil war took place in 1936 and onwards, this happened because an important right wing politician was murdered in 1936. There fore this resulted in general Francisco attempting to take over Spain. In total 174 Welsh men volunteered to go and fight in Spain, only 144 returned. I believe the most important reason for why the Welsh men volunteered was because of their left wing beliefs. A fairly important long term reason why men from south Wales decided to go to Spain was because of their political left wing beliefs. Some men believed in communism and wanted to stop fascism in the world. It says (1) "the fight of the Spanish workers against fascism is your fight". This was a long term reason because what the welsh communists felt had been felt for a long time. ...read more.

A short term reason why men volunteered to go to Spain was because of their social reasons. Some of the volunteers lived in large communist families, which had a long tradition. It says (4) "for these families it was a question of family honour". Some men had to join because family members and friends joined. A man called Lewis Jones encouraged a lot of people so groups of friends might have signed up together. Some men went for fun and adventure. It says (5) "if I can shoot rabbits I can shoot fascists". Men like Lewis Jones rallied around Wales to get volunteers; he encouraged a lot of people. I think this is a short term reason because the volunteers might have made the decisions on the 'spur of the moment'. Some might have been thinking 'why did I join' while in Spain. ...read more.

Another quite important reason why men volunteered to go to Spain was because of their religious beliefs. Although most volunteers rejected religion, they had been brought up non-conformist. They believed that the enemy was equal. It says (9) "it had helped to develop a strong social and political conscience." Another reasonably important factor was the enabling factor. For all the volunteers the costs of the trip and transport was all paid by the communist party, there was no need for passports. I believe the most important reason for why the welsh men volunteered was because of their left wing beliefs. I think this was the main reason because that's what people went to fight for, all the volunteers were communists so they hated fascism. If they weren't communists they wouldn't care about Spain. They didn't want fascism to take over Europe like it had taken over Britain. All the other reasons just gave men more incentives and motives to go. ...read more.