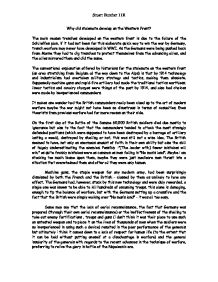 Why did stalemate develop on the Western Front?

Why did stalemate develop on the Western Front? The main reason trenches developed on the western front is due to the failure of the Schlieffen plan, if it had not been for this elaborate quick way to win the war by Germany, trench warfare may never have developed in WWI. As the Germans were being pushed back from Marne they had to dig trenches to protect themselves from the advancing allies, and the allies mirrored them and did the same. The conventional explanation offered by historians for the stalemate on the western front (an area stretching from Belgium all the way down to the Alps) is that by 1914 technology and industrialism had overtaken military strategy and tactics, making them obsolete. Supposedly machine guns and rapid-fire artillery had made the traditional tactics worthless; linear tactics and cavalry charges were things of the past by 1914, and also bad choices were made by inexperienced commanders. It makes one wonder had the British commanders really been clued up to the art of modern warfare maybe the war might not have been so disastrous in terms of casualties. ...read more.

The Germans had, however, stuck by this new technology and were duly rewarded, a single one was known to be able to kill hundreds of oncoming troops. this alone is damaging, enough to tip the balance of warfare, but with the Germans setting up a crossfire and the fact that the British were simply walking over "No man's land" - it was all too easy. Some may say that the lack of aerial reconnaissance, the fact that Germany was prepared (through their own aerial reconnaissance) or the ineffectiveness of the shelling to take out enemy fortifications , troops and guns (i don't think it was their place to use such an untested weapon and to place it on the lives of thousands of men when the soldiers were so inexperienced in using such a device) resulted in the poor performance of the generals but ultimately i think it comes down to a lack of respect for human life (to the extent that it can be held without putting oneself at a disadvantage in warfare) ...read more.

New weapons were being developed, like gas shells and bombs, which could kills masses depending on which way the wind was blowing. As the commanders were rookies in the art of modern warfare, they refused to place much trust in tanks and aircrafts, which if used effectively may have been a weapon that could enable them to break through enemy lines. To achieve the element of surprise was extremely hard in the First World War, as not only were the men watching no-mans land almost 24/7, all attacks normally followed, a long artillery bombardment, or were just generally predictable, and even when on no-mans land, it was not easy to traverse due to large craters in it due to artillery fire. Compared to previous wars Britain had been in, it is not like any of them, the warfare was completely different, and also Germany was an equal opponent to them, with the same developing technologies, and a bigger army. All in all, stalemate on the western front was a combination of the failure of the Schlieffen plan, the incompetence of commanders, the development of technology and the fact that they were two very equally matched sides. Stuart Butcher 11R ...read more.