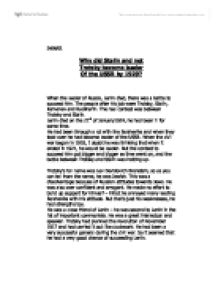 Why did Stalin and not Trotsky become leader of the USSR / Russia?

24/06/02 Why did Stalin and not Trotsky become leader Of the USSR by 1929? When the leader of Russia, Lenin died, there was a battle to succeed him. The people after his job were Trotsky, Stalin, Kamenev and Buckharin. The real contest was between Trotsky and Stalin. Lenin died on the 21st of January1924, he had been ill for some time. He had been through a lot with the Bolsheviks and when they took over he had become leader of the USSR. When the civil war began in 1918, I doubt he was thinking that when it ended in 1921, he would be leader. ...read more.

He had been a very successful general during the civil war. So it seemed that he had a very good chance of succeeding Lenin. Stalin's full name was Josef Vissarianovich Djugash, he was a Georgian and was born near Tblisi in 1879. Stalin was a real outsider in the leadership race; he was virtually unknown and he was not intellectual and not a great speaker like Trotsky. He had not done much in the revolution 1917 or in the civil war. But his strengths were that he was very hard-working, ruthless and cunning. And in 1922 he became party secretary, at the time, this was seen as a boring and unimportant job, but Stalin used his power to promote his own supporters and to send Trotsky's supporters to out of the way places. ...read more.

Stalin had been selected as leader. This was probably because they both had different ideas concerning the future of Russia. Trotsky's idea's were: Rapid industrialisation "World revolution" - German and Hungarian communist revolutions failed in 1919 and this discredited Trotsky's ideas. Stalin's idea's were: Gradual industrialisation Socialism in one country So it's quite understandable how people wanted Stalin to be leader. His idea's were safer for Russia's future and Russia could become a better place to live. The board who selected him to be leader wanted Russia to have a steady future and not have to worry about another revolution, they knew that Russia would be safe in Stalin's hands and they had a lot of confidence in him. Russia looked to finally be on course for a long and successful run. ...read more.