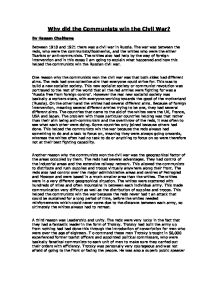 Why did the Communists win the Civil War?

Why did the Communists win the Civil War? By Hassan Cha�bane Between 1918 and 1921 there was a civil war in Russia. The war was between the reds, who were the communists/Bolsheviks, and the whites who were the either Tsarists or anti-communists. The whites also had help by the way of foreign intervention and in this essay I am going to explain what happened and how this helped the communists win the Russian civil war. One reason why the communists won the civil war was that both sides had different aims. The reds had one collective aim that everyone could strive for. This was to build a new socialist society. This new socialist society or communist revolution was portrayed to the rest of the world that all the red armies were fighting for was a 'Russia free from foreign control'. However the real new socialist society was basically a workers state, with everyone working towards the good of the motherland (Russia). On the other hand the whites had several different aims. Because of foreign intervention, meaning several different armies trying to be one, they had several different aims. The countries that came to the aid of the whites were the UK, France, USA and Japan. ...read more.

Trotsky was personally very courageous and was not afraid of going to the front or facing the people. He was also a superb public speaker so he could easily get his voice across or boost morale if required. He did this several times on his personal train, which he virtually lived on, Upon which he took himself and his army of hand picked elite soldiers to the places where the fighting was hardest. On the other hand the whites lacked good leaders. The system within the communist's armies was there was no rank and everyone would be called and treated the same insured unity amongst the ranks. However with the whites, due to there being several independent armies of varying degrees of wealth and successfulness, jealousy was rife. Also the language barrier did not help the white's to unify. This helped the reds to win the war because the reds were always ready to support one another and back each other up. Their leadership and particularly unity made the red army into a feared and strong fighting force. It also helped the reds win the war because the morale was always high, therefore the soldiers were happy to fight. ...read more.

Strikes were illegal and in the countryside peasants were encouraged to work harder and harder. Peasants were allowed to keep the crops they needed but any surplus had to be given to the government and ultimately the army. The peasants resented this because they had won the right to own their land under the communists but were now being not allowed to profit from it. Peasants began hiding and burning crops so that the government couldn't have them. People who did this and were caught were severely punished. War communism helped the reds win because it kept the army well supplied so they were always ready to fight. However, although it was a success for the army, it caused massive famine and widespread starvation amongst peasants and workers amounting in over 4 million lives lost. I believe the most important reason why the Communists won the civil war was their leadership and unity. I believe this because it set the army up so well to fight. Trotsky really was a key man in winning the civil war. He would never allow his troops to let his heads go down or doubt what they were doing. Confidence and assurance is what a successful unit often thrives and this is what Trotsky gave his army. This made the army into a fantastic fighting force. That is why I believe the Communists won the Russian Civil War. By Hassan Cha�bane ...read more.