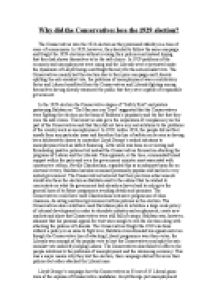 Why did the Conservatives lose the 1929 election?

﻿Why did the Conservatives lose the 1929 election? The Conservatives won the 1924 election as they promised stability in a time of scare of communism. In 1929, however, they decided to follow the same campaign and fought the 1929 elections without revising their policies and instead hoping that they had shown themselves to be the safe choice. In 1929 problems of the economy and unemployment were rising and the Liberals were rejuvenated under the dynamism of Lloyd George and fought fiercely for the anti-socialist vote. The Conservatives mainly lost the election due to their poor campaign and Liberals splitting the anti-socialist vote, the problems of unemployment was a contributory factor and Labour benefitted from the Conservatives and Liberals fighting among themselves having already reassured the public that they were capable of responsible government. In the 1929 election the Conservative slogan of ?Safety First? and posters portraying Baldwin as ?The Man you can Trust? suggested that the Conservatives were fighting the election on the basis of Baldwin?s popularity and the fact that they were the safe choice. This however also gave the impression of complacency on the part of the Conservatives and that they did not have any real solutions to the problems of the country such as unemployment. In 1929, unlike 1924, the people did not feel unsafe from any particular issue and therefore this line of safety can be seen as having been deliberately chosen to contradict Lloyd George?s radical solutions to unemployment such as deficit financing. ...read more.

the anti-socialist vote, it would help Labour and therefore this belief that Liberals were their biggest threat led Baldwin to believe attacking Liberal policies was sufficient in winning the election. In 1929, the liberals splitting the anti-socialist vote due to their increased number of candidates and an impressive sounding solution to unemployment was decisive as Conservatives won a majority of votes but suffered a loss of 140 seats and were left with 260 MPs while Labour had 287 seats. The Liberal intervention turned a good number of seats to Labour. Lloyd George?s campaign and Liberal rejuvenation, thus hurt the Conservatives and was the reason Baldwin chose to follow the anti-Liberal campaign and was therefore a major factor as to why Conservatives lost the 1929 election. Unemployment provided the base for the Liberal rejuvenation as they did have radical solutions while the Conservatives provided none. During Baldwins term unemployment was worsening as it never fell below the 1 million mark and by 1928 the situation was worsening. The government had no real answer as de-rating, introduced by Churchill, failed due to the employers pocketing the excess money instead of using it to create new jobs. This can also be seen as an election policy to impress on the people that the Conservatives still had ideas. ...read more.

never succeed, this caused the support of many in the working class, who previously looked towards the Trade Unions to solve their economic problems and gain reform, to move towards Labour. The Trades Disputes Act of 1927 reaffirmed the working classes belief that parliamentary action offered the best chance of achieving their aims as the act illegalized a general strike. This act combined with unemployment standing over a million helped to bring the trade unionists and the Labour party together again. This big surge of Labour support was partly responsible for the failure of the Conservatives to win the election as they were not only in a stronger electoral position than they had ever been before, the split of the anti-socialist vote helped them win the election and form a minority government. To conclude, the Conservatives lost the 1929 elections due to the fact that their weak campaign was punished by the strength of their opposition. Unemployment was able to help increase the strength of the Liberals and Labour, who were in a much better position than the previous election of 1924. The Conservatives tried to follow the same election policy of ?Trust Baldwin? but they overvalued Baldwins personal appeal and underestimated the importance of unemployment. The Labour and Liberals were able to take advantage of this weak election policy and their own electoral strength meant that the Conservatives lost the 1929 election. ...read more.