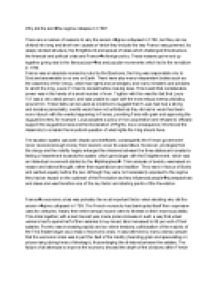 Why did the French regime collapse in 1789?

Why did the anci?ne regime collapse in 1789? There are a number of reasons to why the ancien r?gime collapsed in 1789, but they can be divided into long and short term causes of which they include the way France was governed, its deeply divided structure, the Enlightment and spread of ideas which challenged this structure, the financial and political crisis and France?s foreign policy. These reasons got mixed up together giving rise to the famous journ?es and popular movements which led to the revolution in 1789. France was an absolute monarchy ruled by the Bourbons, the King was responsible only to God and answerable to no one on Earth. There were also many independent bodies such as the Assembly of the Clergy, which had rights and priviledges, and many ministers and advisers to which the king, Louis XVI had to consult before making laws. ...read more.

Moreover, privileges from the clergy and the nobility hugely enlarged the divisions between the three states and created a feeling of resentment towards the system which grew larger with the Enlightenment, which was an intelectual movement started by the ?philisophes?. Their analysis of society was based on reason and rational thought, rather than supersticion and tradition. They were in favour of liberty and wanted equally before the law. Although they were not necessarily opposed to the regime they had an impact on the outbreak of the Revolution as they influenced people?s perspectives and ideas and was therefore one of the key factor and starting points of the Revolution. France?s economic crisis was probably the most important factor when deciding why did the ancien r?gime collapsed in 1789. The French monarchy had bankrupted itself from expensive wars for centuries. ...read more.

This frightened the King who decided to use military force and ordered troops to be moved to Paris. This caused alarm in the capital and it became obvious that the King and his advisers had decided to dissolve the National Assembly, by force if necessary. Therefore we can say that together with Louis XVI`s weak personality, his decision to use military force caused the start of the popular movements, or journ?es, such as the capture of the Bastille, which would give the final stroke to the ancien regime given its symbolic importance. In conclusion, and answering the question of why did the anciene regime collapse, we can say that the mayor themes were Louis XVI?s ineffiency both in character and in making decisions, movements such as the Enlightenment which made people reconsider their conditions on society, the economic crisis caused by France ?s foreign policy and bad harvests, and the way France was governed including the taxation system which enlarged the divisions between the Three Estates and their living styles. ...read more.